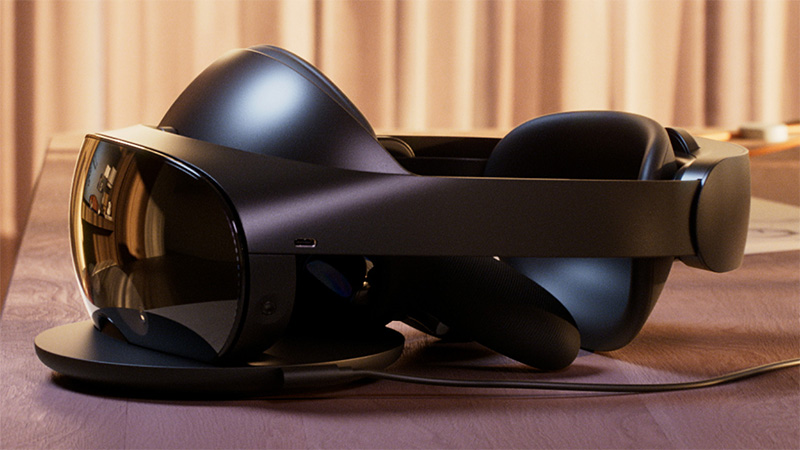 The new headset, unveiled during Meta’s annual Connect conference, is available for pre-order today for $1,499 and will ship on Oct. 25. It’s aimed at the higher-end consumer crowd and represents a new branch of headsets alongside the Quest 2 lineup, with a whole new feature set.

The more affordable Quest 2 will continue to be sold for $399 for users looking to get into virtual reality with apps such as fitness, gaming and socialization. Although most apps that work on the Quest Pro will also be compatible with the Quest 2, Zuckerberg explained that some will be exclusive to the new device.

The Quest Pro has been designed with specialized pancake lenses, giving it a sleek, lightweight body that Zuckerberg claimed is 40% thinner than Quest 2, putting more pixels into the center to make reading text easier. He also said it has 37% more pixels per inch.

The current device uses the Qualcomm Snapdragon XR2+ processor, which according to Meta is 50% more powerful than the Quest 2’s XR2. It also boasts 12 gigabytes of memory instead of 6 gigabytes. With 256 gigabytes of storage, it should also be able to hold a lot of apps as well. The two display panels can drive 1800 by 1920 pixels per eye.

The controllers have also seen a big upgrade. Before, the controllers were tracked by the headset, which meant that they used special rings attached to them. The new controllers instead are covered in tiny cameras that allow them to track their own position in space and relay that back to the headset. This allows them to have a smaller form factor, which may make them easier to hold.

Although these are significant changes, the button layout remains the same, so users of the Quest 2 controllers will not find them difficult to adapt to. To make sure that it’s easier to keep charged, the whole setup comes with a charging “stand” that looks like a dinner plate that the headset and the two controllers can be set on.

The Quest Pro also has a number of inward-facing cameras that allow it to see the face of the user. This means that virtual reality avatars will be able to more readily mimic facial expressions, creating an increased sense of social presence. For example, if the person grimaces or smiles, the cameras will be able to map that expression onto their avatar in virtual reality, making it easier for them to express their feelings to someone they’re talking to.

And, with a full-color camera, the device is capable of allowing color passthrough so that while wearing the headset full “mixed reality” is possible. This is a mixing of virtual reality and what the user sees at the same time.

Zuckerberg played up the productivity capabilities of the Quest Pro headset through its mixed reality capabilities by making in-office and remote collaboration even easier than before.

For example, using the headset, it would be possible to bring together someone who was in the office, a person on a Zoom call and someone in a virtual reality space all at the same time. Since the headset can see and broadcast a room and virtual objects, everyone involved in the collaboration session would be able to interact with those objects – and with avatars – even see each other standing around in the world remotely connected.

The Quest Pro is currently available for preorder online for $1,499 through the Meta Store. It will also be available for purchase starting Oct. 25 in the United States, Canada, United Kingdom and France.