Black Friday, the day after Thanksgiving in the US, has traditionally signalled the start of the American Christmas shopping season. Retailers would offer massive discounts to lure customers, but the size of turnover would be enough to put them in the black financially for the year, hence the name (or at least that’s one version of its origin).

In recent years Black Friday has spread out across multiple days including online sales (such as Cyber Monday) and to other countries such as South Africa.

Global markets have been on sale for most of the year as bonds and equity prices tumbled. The past few weeks have seen a bit of a reprieve.

Ironically, of course, when there is a sale at the shops, people are often in to buy, sometimes purchasing items they didn’t really need or want. When markets go on sale, people often run away, selling in fear instead of looking for bargains.

While there is no doubt that markets are cheaper across a broad front compared to the start of the year, whether current valuations are exciting or not depends largely on one variable: inflation.

If inflation, particularly US inflation, recedes quietly in 2023, all’s probably well. If not, we’re in for a scenario where interest rates will have to be higher for longer. This not only risks tipping economies into recession – always bad news for equities – but higher cash yields also create competition for equities.

On the inflation front, the good news is that commodity prices have eased and supply chains are gradually becoming unclogged. What this means generally speaking is that goods inflation has peaked and is declining. In some instances, we might even see goods prices decline.

For instance, many retailers stocked up on goods over the past year, worried about a repeat of the shortages experienced in 2020 and early 2021.

However, in many instances they’ve gone too far. Therefore, some big Black Friday discounts this year were not just about luring shoppers, but also getting rid of unwanted inventory.

The chart below shows how US retail sales progressed relative to inventories. When the lockdowns hit, sales collapsed, but soon outpaced stock levels as demand for goods surged. The ratio declined and prices shot up. Now inventories are rising much faster than sales, so supply is outstripping demand, leading to downward pressure on prices. 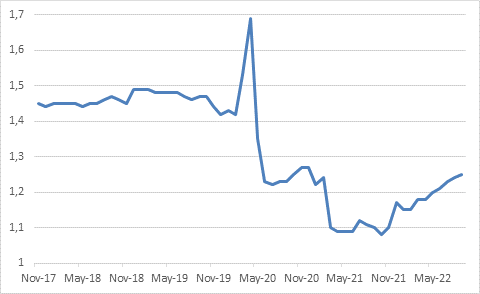 As for commodity prices, oil remains volatile but is well below the June peak of $130 per barrel. In fact, it has been below $100 since late August.

If the price stays around $90 per barrel, the year-on-year rate of change will hit 0% by February and then fall sharply. Oil will still be expensive, but its inflation rate will be negative.

The story for natural gas prices in Europe is less forgiving, but still better than earlier this year.

German gas prices spiked to the unimaginable level of €320 (around R5 626) per megawatt hour in August, according to the European Energy Exchange.

If it stays at this level, it will also be very expensive, but the inflation rate will decline to zero soon. It is hard to know what lies ahead, however. Europe’s gas storage is currently full but will have to be restocked without Russian gas after winter. On the other hand, a de-escalation of the war in Ukraine will see prices fall.

Food prices are also off their peaks. The UN Food and Agriculture Organisation’s global food price index was 135 at the start of the year. It spiked to 159 in March (40% year-on-year) but is now back at 135.

Read: Checkers vs PnP as Black Friday battle kicks off

The inflation problem is therefore in services. In rich countries, people spend more on services (including housing, healthcare, financial services, communication and leisure activities) than they do on goods (such as food, fuel, toys, furniture and cars) and services form a bigger portion of inflation baskets.

Goods, especially commodities, are often traded across borders and therefore prices are largely set in global markets. Services tend to be more local in nature.

Your doctor, hairdresser and favourite coffee shop are probably not providing services in other countries. Housing is by definition very local.

It also means households are earning enough to afford higher prices and keep spending. While wage growth has lagged inflation in most advanced economies, it has been relatively robust, and with unemployment low and workers generally in short supply, is likely to remain solid.

Together with high levels of savings, households can keep spending. This will potentially slow the decline in service inflation. 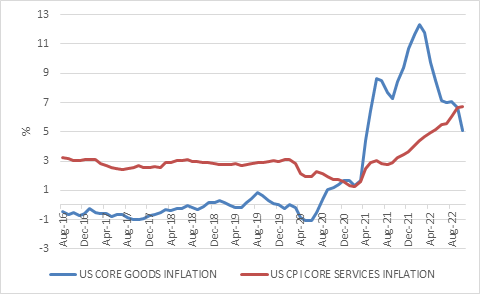 There is one silver lining in the inflation story. Survey data shows that households still believe inflation will eventually return to longer-term averages and that the current inflationary spike will not last.

This is important since such expectations can inform behaviour and therefore become self-fulfilling.

All in all, then, the US Federal Reserve and other central banks are not done with raising interest rates, but the end is probably in sight.

In the case of the Fed, it is likely to raise interest rates to somewhere above 5% by early next year. Once they are there, it is likely to pause for some time and assess the situation. Cutting rates seems very unlikely until there is clear evidence that inflation has gone down and will stay down.

The challenge is the lags. By the time inflation is well on the way to the 2% target and expected to stay there, the economy might well buckle under the weight of the cumulative rate increases and sustained high level of rates.

The jury is still out on how this scenario will unfold.

South African inflation has been much better behaved than the US since there was never the excess demand and the energy price shock has been smaller.

The pattern is similar, however, in the sense that goods inflation has peaked in double-digit territory and is rolling over, while service inflation is still rising gradually.

Nonetheless, October’s inflation report was worse than expected. Headline inflation rose to 7.6% year-on-year from 7.5% in September. Food and fuel prices remain the largest contributors. Excluding these items, core inflation was 5%, up from 4.7% the previous month.

Against this backdrop, the South African Reserve Bank’s Monetary Policy Committee (MPC) raised the repo rate by 75 basis points to 7%.

As is the case with other central banks, the MPC has front-loaded rate increases, looking to move to positive territory in real terms as soon as possible, rather than gradually increasing and assessing the situation as the go along. Here too, the full impact of the rate hikes is yet to be felt.

Getting back to the question of whether there is value on offer on global markets, a good starting point is to assess what is being priced in.

By and large, it is a relatively soft-landing scenario where inflation declines without economic growth and company earnings collapsing completely.

Take US bonds for instance. The difference between inflation-protected and nominal bond yields gives an indication of what future inflation rate is discounted. This is known as the breakeven inflation rate.

As the chart below shows, it jumped last year and peaked in March but has declined substantially. The rapid increase in nominal bond yields since March has therefore been driven by expectations of higher interest rates, not fear of runaway inflation. The subdued gold price also suggests that a more stubborn inflation outlook is probably not priced into markets. 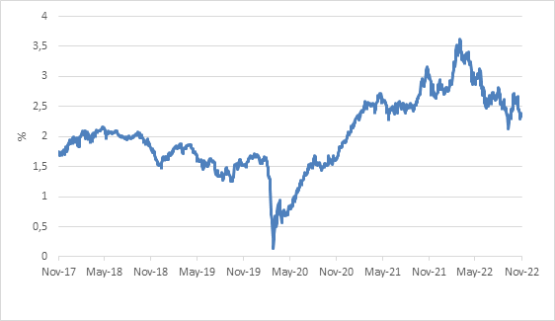 Clearly then, sticky inflation poses a risk to bonds.

Nonetheless, government bond yields across the developed world have increased to levels last seen more than a decade ago and warrant serious attention from investors. In particular, they offer a useful hedge against a recession scenario, since bond yields tend to fall in a recession.

Corporate bonds usually trade at higher yields than government bonds to account for increased risk. At times of uncertainty, such as now, this spread widens. Yields of between 5% and 8% in dollars are now available on a broad range of corporate bonds, depending on the duration and credit risk. And of course, cash yields are also at decade-plus highs.

Broadly speaking then, global fixed income presents the best entry point in many years and offers a reasonable alternative to equities for the first time in a long time provided inflation does not prove to be a longer-term problem.

As for the stock market, the big risk is the earnings outlook. The standard way of valuing equities (but by no means the only way) is the forward price-to-earnings (PE) ratio.

The lower the PE ratio for the broad market, typically, the better future returns are likely to be.

It captures two things. Firstly, how much investors are prepared to pay for each dollar’s worth of profit delivered over the next year. This is a function of sentiment. As rates shot up this year, PE ratios declined sharply across all major markets. The US remains more expensive than the rest of the world, but has also declined considerably, particularly for small and medium-sized companies. So far so good. It is the second component that is tricky: expectations of future earnings.

Expectations of earnings growth have been revised lower as the economic outlook has softened. But it is an open question whether those expectations have been reduced enough, given that the global economy is experiencing an interest rate shock – the effects of which will play out over time as discussed above. If earnings growth turns out weaker than expected, equities will not be as much of a bargain as it appears at first glance.

A lot of bad news is now clearly in the price, but not necessarily all of it. For anyone with a longer-term horizon, say 10 years or more, it should not really matter much what happens in the next year or so provided you stay invested.

Indeed, the current entry point for equities looks like the most favourable in almost a decade, provided you are a patient investor. Over the shorter term, however, anything can still happen.

Clearly South African equities are not only trading at a big discount to global markets, but also at low levels compared to recent history.

In fact, the JSE is already trading at levels usually seen during recessions.

South African bonds continue to discount a lot of bad news too, despite the fact that the country’s fiscal condition is gradually improving, as confirmed by S&P Global’s recent rating decision. Meanwhile, the Reserve Bank’s determination to keep inflation under control is an important anchor to longer-term bond valuations.

Putting this all together, a balanced portfolio of assets does indeed offer much better value than at the start of the year, much like a Black Friday sale.

This doesn’t mean it will be smooth sailing from here on out. On the contrary, markets are likely to remain choppy for some time as the inflation uncertainty plays out. And, like a Black Friday sale, it makes sense to be selective and not buy anything with a big shiny sticker.

However, for the patient investor prospects for future returns have certainly improved.