It is often said that we are our own worst enemies. This can be particularly true when it comes to investing.

Traditional investment theory is founded on the belief that investors consider all relevant information before making rational investment decisions. However, in practice, this is often not the case as investors are negatively influenced by numerous behavioural biases.

Researchers have identified several behavioural biases, which include:

The importance of staying invested

During increased market volatility, these biases can be more pronounced. While many growth-oriented investors profess to have higher risk tolerance, loss-aversion behavioural bias often surfaces when the value of investments falls by more than about 10%. At this point, investors may sell their long-term growth investment and seek the perceived safety of cash. However, as difficult as it may seem, doing nothing in market downturns may be the best investment strategy.

The graph below illustrates the difference between three scenarios (as represented by the FTSE/JSE All Share Index) after a significant market correction (the Global Financial Crisis of 2008, when the market lost approximately 32% from peak to trough): staying invested in the equity market; selling at the bottom and reinvesting a year later; and selling and staying in cash. 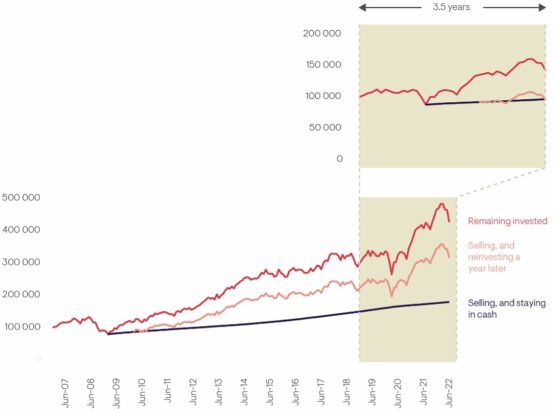 Source: Morningstar and Ninety One as at 30.06.22 – the charts are for illustrative purposes only

The worst outcome was selling at the bottom of the market and remaining in cash, demonstrating the risk of conservatism. The market returned to its previous high in just 29 months. Investors who switched to cash had to wait nine years before the value of their investment returned to where it was at the May 2008 peak. It is unsurprising that remaining invested delivered the best outcome for investors, even when the market corrected earlier this year.

The inset chart, where we repeat the exercise for the shorter period after the Covid correction in March 2020, reinforces that staying invested remains the best option in volatile markets.

Further evidence to support remaining invested is provided by American research company, Dalbar*. Since 1994, Dalbar’s QAIB has measured investor decisions to buy, sell and switch into and out of US mutual funds over short and long-term timeframes. The results consistently show that the average investor earns less than fund performance reports would suggest. This is simply due to self-destructive behaviour – selling out when performance bottoms and buying in when it peaks.

For example, for calendar year 2021, the average equity fund return was a seemingly attractive 18.4%. However, when comparing this to the S&P 500 return of 28.7%, it reveals an alarming return difference of 10.3% – the third largest investor return gap since 1985, when QAIB analysis began.

According to Dalbar, the average investor has failed to realise the long-term benefits of asset ownership because they do not stay invested for sufficient time. Since 2000, the average investor retention rate has ranged between approximately 2.5 and 4.5 years, far below the recommended investment holding period of at least seven years for equities. Being aware of these behavioural biases is the first step to overcoming their detrimental effect and improving investment outcomes.

The value of independent financial advice

While there is increased noise around instability in financial markets, investors should not panic. They would do better to revisit and recommit to their long-term investment goals and bear in mind that they are more likely to achieve these by ensuring time in the market than trying to time the market.

In this environment, financial advice is all the more critical. A good financial advisor can help investors understand their future cashflow requirements and ensure that investment portfolios are structured correctly to cater for these needs, which then require surprisingly little attention during periods of excessive market volatility.