Brazil assets had topped peers this year as investors convinced themselves that Luiz Inacio Lula da Silva would make a safe pair of hands for the economy. Now that he is set to take office though, they are not so sure.

After winning election last month, Lula has doubled down on his plans to boost social spending, while his transition team includes names that played key roles in the government of Dilma Rousseff, his hand-picked successor who led the economy into a severe recession. That was enough for Citigroup to recommend clients cut their Brazil exposure, and for local assets to lead global declines last week.

“Names bandied about do not inspire any confidence about a differentiation with a Dilma regime,” said Hari Hariharan, the chief executive officer at New York-based NWI Management. 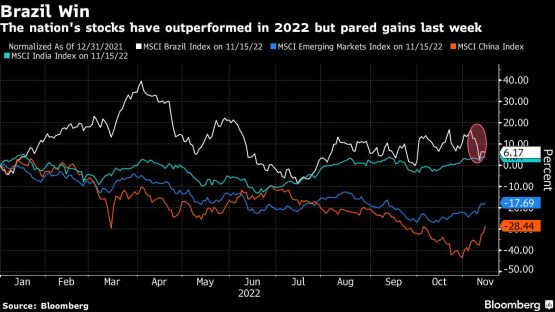 The real slumped 1.2% against the dollar Wednesday, after sinking 5% last week, when it was the worst performer after Ghana’s cedi among more than 140 currencies tracked by Bloomberg. Swap rates due in 2029 gained 17 basis points last week to reach the highest level since July, while the Ibovespa Index sank 5%, the biggest decline since June.

Stocks resumed their selloff on Wednesday as markets reopened after a holiday, with the Ibovespa closing 2.6% lower.

Traders will focus this week on the formal announcement of a constitutional amendment draft to authorize more spending, Olga Yangol, head of emerging market strategy for Credit Agricole SA in New York, wrote in a Monday note.

Lula’s transition team wants to conclude the draft by Wednesday, according to Workers’ Party Senator-elect Wellington Dias. Earlier today, lawmaker Paulo Pimenta said it’s still unclear whether the bill will be valid for only a year, and added that it won’t set a specific amount for expenses initially.

Lula said that he won’t give any details on his cabinet before returning from an international trip to attend COP27 in Egypt.

“The stakes are high in terms of fiscal uncertainty, in terms of cabinet composition, in terms of key appointments in the economic team,” said Joel Virgen Rojano, director for Latin America strategy at TD Securities. “All of that for now has a really big question mark and the markets are becoming impatient.” Emerging-market investors from Neuberger Berman LLC to Franklin Templeton had bet on the South American nation ahead of the election as they saw little distinction between Lula and President Jair Bolsonaro’s fiscal agenda. Neuberger wasn’t immediately available to comment on its current recommendations in Brazil.

“Markets tend to hate uncertainty,” Dina Ting, head of global index portfolio management for Franklin Templeton exchange-traded funds, wrote in an emailed response to questions. “From a long-term perspective, the fundamentals and macro factors have not changed. Brazil is still trading at a discount to historical averages and helped by both elevated commodity prices and favorable demographics, including its young workforce.”

The biggest problem for Brazil investors may be China’s success.

The change in attitude toward Brazil over the last week coincided with a string of market-friendly policy surprises out of the Asian giant, including sweeping directives to rescue its property sector and a 20-point playbook from the National Health Commission aimed at reducing the economic and social impact of containing Covid.