Intel Corp. is looking to compete with rivals Advanced Micro Devices Inc. and Nvidia Corp. in the high-performance computing and artificial intelligence spaces with the launch of its latest product family, the Intel Max.

The Intel Max series is comprised of both central processing units and graphics processing units. The Intel Xeon CPU Max Series, code-named Sapphire Rapids HBM, and the Intel Data Center GPU Max Series, will both be used to power the Argonne National Laboratory’s upcoming Aurora supercomputer, which is slated to go online next year.

Aurora is expected to the the first supercomputer in the world to exceed two exaflops of peak double-precision compute performance, and will be the first system to pair the Max Series CPUs and GPUs together. All told, it will house more than 10,000 server blades, with each one containing six Max Series GPUs and two Xeon Max CPUs.

Intel said that while Aurora will showcase the power of the Max series, the new products are really about making HPC and AI more accessible to a broader market. “We’re trying to help solve the world’s biggest challenges faster and do that in a sustainable way,” said Intel Corporate Vice President and General Manager of the Super Compute Group Jeff McVeigh in a media briefing.

The executive explained that a whole bunch of complex problems around issues such as climate change and global health can be solved more rapidly with the help of HPC and AI. He explained that Intel aims to tackle a wide diversity of workloads in those domains, with some being heavily compute-bound and others being constrained by memory bandwidth. “Our view is, all these are important, and we need to have the right solutions to address them,” McVeigh added.

The Max Series chips are united by Intel’s open, standards-based and cross-architecture programming framework oneAPI, which brings a single programming environment for both new processors.

Intel said the Xeon Max CPU is its first and only x86-based processor to feature high bandwidth memory that can accelerate HPC workloads without needing to fiddle with their code. It’s said to be Intel’s highest-density CPU so far, with over 100 billion transistors squeezed onto a 47-tile package and 128 gigabytes of high-bandwidth memory.

“To ensure no HPC workload is left behind, we need a solution that maximizes bandwidth, maximizes compute, maximizes developer productivity and ultimately maximizes impact,” McVeigh explained. ““The Intel Max Series product family brings high bandwidth memory to the broader market, along with oneAPI, making it easy to share code between CPUs and GPUs and solve the world’s biggest challenges faster.” 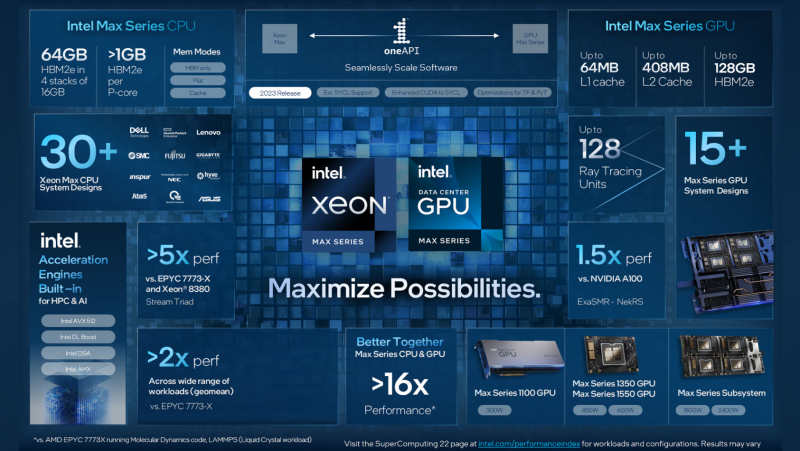 Intel is keen to make its presence felt in the HPC space, which many believe is at the cutting-edge of computing technology. It involves solving the world’s toughest challenges using the most advanced innovations in silicon at scale. So being seen as a leader in the space is a matter of prestige for a company like Intel.

Getting into the specifics of some common HPC workloads, Intel said the Max CPUs are 2.4-times faster than the AMD Milan-X for climate modeling workloads, and 2.8-times faster when it comes to molecular dynamics.

As for the Intel Max Series GPU, this comes with up to 128 Xe-HPC cores and is meant to be the foundational architecture for the most demanding HPC workloads. It features 408 megabytes of L2 cache, the highest in the industry, and 64 MB of L1 cache, providing a big boost to throughput and performance, Intel promised.

There’s more to come too, with Intel promising that a new Intel Data Center Max Series GPU, the successor to the Max Series GPU, will arrive in 2024 and bring a significant performance improvement. Around the same time, Intel said it will also launch its next major architecture innovation for the future of HPC with its upcoming auxiliary processing unit, called Falcon Shores, which will combine x86 and Xe cores on a single package.