Over the past few weeks, the short-lived tenure of former UK prime minister Liz Truss presented a lesson in how not to conduct responsible fiscal policy. Wednesday (26 October) should present a much better, but far from perfect, example as South Africa’s Finance Minister Enoch Godongwana presents the Medium-Term Budget Policy Statement (MTBPS).

Trust takes time to build, but can be destroyed instantly. By recklessly trying to ram through a massive package of tax cuts and increased spending, at a time when markets were already jittery, Truss and Kwasi Kwarteng, who was briefly chancellor of the exchequer (finance minister), inflicted massive losses on bondholders and almost blew up the private pension system. To regain some credibility, new Chancellor of the Exchequer Jeremy Hunt cancelled the planned tax cuts that would have required substantial additional borrowing at a time when the UK already runs a big fiscal deficit (the difference between spending and tax revenue) and has a debt-to-GDP ratio near 100%.

Hunt is reportedly considering going further and wants to cut spending to reduce government’s borrowing requirement. This is controversial among his Conservative Party peers since it would almost guarantee a loss at the next general election. In the end, the only way to begin to undo the reputational and financial damage was for Truss to resign after only 44 days in office, making her the shortest-serving prime minister ever.

Read: Sunak to be the next UK prime minister

It brings to mind the notion of ‘bond vigilantes’ introduced by US economist Ed Yardeni in the early 1980s.

At the time he warned that the bond market would impose discipline on governments that did not manage their fiscal affairs well.

If investors dump your bonds, borrowing costs rise, making long-term debt more expensive. This forces the government to cut spending to reduce deficits and prevent its interest burden from exploding – a painful process to regain credibility.

South Africa is also still trying to win back credibility after Nenegate in 2015 and the general fiscal profligacy of the [former president Jacob] Zuma years. With Nenegate (Zuma’s sudden sacking of then finance minister Nhlanhla Nene), South Africa’s bond yields derated compared to other emerging market bonds and the gap has not yet closed, speaking to a big risk premium that investors now demand to lend to the South African government.

The bond vigilantes are forcing action locally too, as National Treasury continues to try to reduce its borrowing requirement in the face of high bond yields.

That brings us to this week’s MTBPS.

The good news is that Godongwana is likely to present a tax revenue overrun compared to the February Budget projections.

Read: Tax compliance efforts yield billions for the fiscus
Rad/listen: What to expect from the medium-term budget policy statement

This is partly because of conservative assumptions in the latter, but also as the economy has delivered decent tax growth. Commodity prices have remained elevated, though they have been declining of late as global growth concerns increase. Fortunately, National Treasury does not base its planning on a belief that commodity prices will be high forever.

The other reason for better-than-expected tax revenues is that inflation is good for tax growth. Higher inflation raises nominal economic growth, and this in turn tends to raise tax revenue growth. Companies and individuals pay a percentage of the rand amount of their income. If inflation pushes this up, the fiscus benefits. Individuals can also end up being pushed into higher tax brackets when inflation is high, unless relief is granted by adjusting brackets for this so-called fiscal drag.

Since higher inflation pushes up the rand value of total economic activity, the debt and deficit ratios also tend to look a bit better (both are expressed relative to nominal GDP).

However, inflation can also place indirect pressure on the budget, since clamouring for increased social spending and public sector wage increases rises with the cost of living.

Food and fuel prices, the most visible and volatile elements of consumer inflation, are particularly high. In September, fuel prices were 34% higher compared to a year ago and food prices 12% higher. Fortunately, fuel inflation is off its high, and this lowered the overall headline inflation rate to 7.5% from 7.6% in August and the recent peak of 7.8% in July. Core inflation, which excludes food and energy and gives us a good view of underlying inflationary pressures, continues to increase gradually, but at 4.7% year on year is not worryingly high. Managing the pressure for inflation relief through increased government spending requires political will. This is a global theme. Rich European countries are providing ample support to counter record natural gas prices in the wake of the Russian war. It was also a big portion of Truss’s ill-fated fiscal intervention.

However, in South Africa, the government is largely holding the line, apart from a temporary reduction in the fuel levy mid-year. Unfortunately, there simply isn’t the fiscal space for more support. Whether this conservatism can continue to defy political pressure remains to be seen, especially as the 2024 election looms.

This is one of the main reasons SA government bonds carry such a large risk premium. Investors are assuming that the probability of populist spending is real.

However, any government, whether the current ANC government or some future coalition, will be faced with the simple reality: debt-service costs are rising rapidly and are crowding out other areas of spending. The longer-term benefits of getting debt under control are substantial. 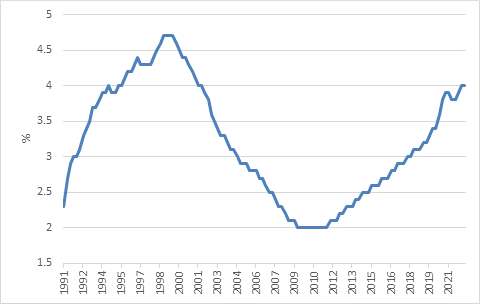 Still, there is likely to be some slippage on the spending targets set out in February.

Cash-starved state-owned enterprises (SOEs) continue to be a near-bottomless pit for public finances, with ongoing support needed for the likes of the Post Office and Denel.

Treasury’s call for a tough-love approach is not always heeded elsewhere in government, and little has as yet come of the promises to review the portfolio of SOEs to separate the must-haves from the nice-to-haves, and within each entity, separating commercial mandates from developmental or public service mandates.

The biggest SOE of them all, Eskom, is likely to see up to half its R450 billion debt taken over by the government eventually.

The finance minister promised an announcement on resolving Eskom’s debt problem this week, but we might not get all the details yet. The process is complicated politically and technically, as bondholders need to be sure they remain on the same footing as previously. The government already guarantees most of Eskom’s debt, so taking full responsibility doesn’t change its effective debt profile.

It will just make explicit what was implied and will add two to three percentage points to the debt-to-GDP ratio. For Eskom itself, the change will be material, reducing its interest burden and moving it along the road to financial sustainability.

This in turn should support its operational sustainability, allowing for more spending on maintaining its plants, expanding the grid and bringing on some new capacity.

The other area of slippage is the public sector wage bill.

Teacher unions have settled for a 3% increase (plus a cash gratuity and pay progression) and this is likely to be a benchmark for the remaining negotiations.

This implies more growth in the public sector wage bill than the February Budget pencilled in, but still means that the expansion of the wage bill is slowing compared with the pre-2020 trend. The ship is therefore slowly turning around.

Announcements on changes in social welfare policy are typically made in February, so no news is expected on a basic income grant (BIG) or similar measure. At any rate, Treasury has previously indicated that a permanent increase in social assistance such as a BIG would require a permanent new source of revenue, possibly in the form of a higher value-added tax rate.

Treasury’s efforts to narrow the budget deficit and stabilise the debt-to-GDP ratio are notable and a source of comfort, and luck has been on its side in terms of elevated commodity prices. As a result, the budget deficit for the current fiscal year is likely to be between 4.5% and 5% of GDP – still large, but smaller than the 6% deficit projected in February and also smaller than the previous year’s 5.7% deficit.

However, the only way to permanently put state finances on a sustainable footing is faster economic growth (and not just temporary jumps in inflation), which will require the government playing a smaller role in the economy and focusing instead on getting the basics of service delivery right. The MTBPS occurs against the backdrop of turmoil in global government bond markets.

The UK bond market has been particularly volatile in recent weeks for reasons described above. The FTSE UK Government Bond Index has lost almost 30% in pounds this year, compared to a 5% loss for the FTSE 100 equity index. Since the pound has lost around 16% against the US dollar this year, the returns in dollars are far worse, though both the pound and the bond market rallied in anticipation of Truss’s resignation.

The picture is only somewhat better in other bond markets. The FTSE World Government Bond Index (the one South Africa was excluded from after the final downgrade to junk status in 2020) has lost 15% in dollars this year – the worst drawdown on record.

South African bond returns have struggled to stay above water this year, but it has hardly been a record-breaking year, even when measured in US dollars.

Bond returns are determined by the interest income plus or minus changes in the bond price. Yields were high at the start of the year, in contrast to developed countries. This means anyone who bought a SA 10-year government bond in January can count on 9.4% interest income per year to counteract any negative price movements. In the case of the UK, the 1% interest income is not nearly enough to offset massive price declines as yields surged. This is the benefit of what many investors call a valuation margin of safety. 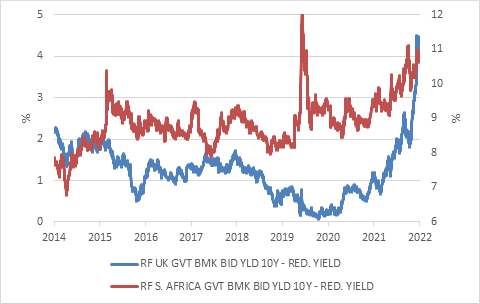 If South African bonds were attractively priced at the start of the year, they are even more so today. There are risks of course, but investors are handsomely compensated for those.

While maintaining fiscal discipline will be a constant struggle for Treasury in the years ahead, the commitment to do so remains there.

Importantly for investors, the SA Reserve Bank is also committed to getting inflation back within its 3% to 6% target and managing it down towards the bottom end of the range over time. This is a key anchor to bond valuations, since inflation is a more persistent risk for bondholders anywhere in the world than default.

For the first time in more than a decade, the global market is also starting to offer good long-term value for South African investors.

Looking through the rear-view mirror, bond returns have been poor globally and disappointing locally. Looking ahead through the windshield, the return outlook is much better.

Izak Odendaal is an investment strategist at Old Mutual.