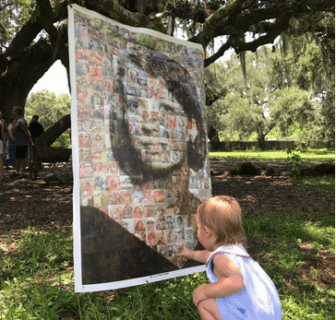 A memorial to Donna Nathan, whose suicide spurred a gun law allowing people to put themselves on a ‘Do Not Sell’, Photo by Josh Hailey

On June 26, 2018, Donna Nathan typed the words “gun stores New Orleans” into her phone and followed the GPS on her screen to the nearest firearms shop.

Minutes after arriving, though she had never owned a gun and had been diagnosed with bipolar disorder, she had herself a .38 Smith & Wesson and a box of bullets — pink ones, to promote breast cancer awareness.

Then she drove to the Tree of Life in the city’s Audubon Park, and shot herself.

“I was shocked to find out that her buying a gun was so easy and completely legal,” recalls  Katrina Brees, Nathan’s daughter. “It was just one button away on her phone.”

Firearms are the most common means of suicide in the US, accounting for 53 percent of all suicides in 2020. Her mother’s death was the fourth gun suicide in Brees’ family history, and a tipping point.

“The next morning,” she said. “I went straight into action.”

Brees began gathering support for a solution she believes can head off future tragedies, a way for people like her mother to voluntarily add themselves to a Do-Not-Sell List that prevents them from quickly buying a gun.

“There are almost no barriers to buying a gun in Louisiana,” Brees says. “Every year we have more than 600 suicides here, and two thirds are by firearms.”

State by state, Brees’ solution is becoming a reality.

Versions of the Voluntary Do-Not-Sell List — or Donna’s Law — have since been passed in Washington State, Virginia, and Utah. The law grants people the option to voluntarily and confidentially add their names to their state’s background check system to prevent them from impulsively purchasing a gun.

If they want to buy a gun, they can file a request to have their name removed after a 21-day waiting period.

“The odds of successfully committing suicide are 140 times greater when there is a gun,” Jayapal said in a statement. “Our bill ensures that people who are liable to hurt themselves cannot access a firearm.”

It’s one of the few pieces of gun safety legislation both parties can agree on. The Wall Street Journal called it a “libertarian approach” to gun control.

“I didn’t know this before, but nearly 24,000 people die by gun suicide in America every year,” Curtis said in a recorded conversation with Jayapal. “That’s 65 per day.”

In his home state of Utah, suicides make up 84 percent of all firearm deaths.

Katrina Brees is sure her mother would have signed up. 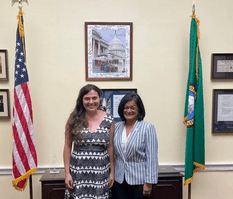 “My mom had fought so hard to stay alive. She had voluntarily checked herself into psychiatric hospitals three times in the months before her death when she thought she might harm herself.”

If she had been committed involuntarily to a psychiatric hospital, she would have been automatically added to the background check system.

“But because she went there voluntarily, there was no way for her to prevent herself from buying a gun,” Brees says.

“Part of the commitment of putting yourself in there is to separate yourself from lethal means.”

In October 2017, her mother had changed her Facebook profile picture to show a gun crossed out.

Brees recounts all the ways her mother tried to save herself during her 30-year struggle with mental health, and that previous suicidal periods had always been very impulsive, “almost like a panic attack..”

“Right before my mom died, she was in the fight for her life,” Brees said. “The last time I spoke with her, she was talking about not letting go of hope and that she would do everything she could to get through this.”

Her mother had gone to “hundreds of doctor appointments in her life,” Brees remembered. “She worked with her psychiatrist; she took medication that had tremendous side effects. She had doctors and family totally committed to her.

“ She literally said, ‘I don’t want to die.’ She was excited about her new grandbaby. I think one of the saddest pieces of suicide misinformation is for us to think these people wanted to die.

“But the impulsivity of this really became obvious because this does not feel like the choice she really wanted.”

The laws are too new for their effects to be evaluated in the three states where they have already been implemented, but mental health experts agree that delaying access to firearms in times of Crisis is a life-saving strategy.

The American Foundation for Suicide Prevention, the National Alliance on Mental Illness, the National Education Association and Suicide Awareness Voices of Education all support the bill.

The most common objection to such laws is that suicidal people will simply find another way, but many suicide attempts occur with little planning during a short-term crisis, and 90 percent of attempters who survive do not die by suicide later.

Even if some might try other methods, few are as lethal as a firearm.

For example, the estimated fatality rate of a suicide attempt using drugs is less than five percent.

Another objection is that the people who might need it the most won’t sign up. According to Fred Vars, a University of Alabama at Birmingham law professor who has bipolar disorder and has experienced suicidal ideation himself:

“So much about suicide is impulsive,” he says. “[These laws are] about people helping themselves versus the government saying, you can’t have a gun. I don’t want to die, and me signing up for this list would reduce the probability of me dying.”

When Vars asked 200 psychiatric patients at the University of Alabama Medical Center, nearly half said they would sign up. Brees says she receives messages from people all over the United States who tell her, “This would work,” and plead for the right to sign up.

“People like me, who recognize that they are prone to suicidality, need this Act,” mental health advocate Bryan Barks recently wrote in the Washington Post about her battle with bipolar disorder.

Katrina Brees drove to the Skamania courthouse in Washington State to sign herself up for the Do-Not-Sell List, just to try it out, and found it was an easy process. But of course, the law only works statewide.

“This is why we need federal legislation,” Brees urges.

She and mental health experts also believe that allowing people to sign up in schools or doctors’ offices could increase participation.

“And there are no side effects!” Brees says. “It’s just such a great way for people to empower themselves in self-defense against suicide.”

Some states recommend that gun owners let friends or the police “babysit” their guns during a depressive episode. However, “there is a lot of shame around this topic,” Brees knows. “Some don’t want their friends to know they’re going through a rough patch, or they don’t trust they’ll get their guns back later.”

She asked him if she could return the gun. “He said, ‘All sales are final,’ and hung up.”

Despite the history of gun suicides in her own family, Brees says the topic was rarely addressed because of the shame and stigma associated with it, and is relieved that her activism has opened up the gates for her and her family to speak about the issues.

Brees, an artist, shows pictures of her mom and reminisces about the many New Orleans parades she and her mother attended together. Brees is head of a dance troupe called the Bearded Oysters, and she made some of the big floats with giant animals.

“My mom loved to ride in the pickup truck and then dance with the troupe.” She tears up when she says, “We were all just so naive about how easy it was for her to get access to a gun.” 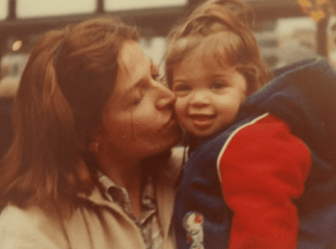 Donna Nathan and Katrina in 1979. Photo courtesy of Katrina Brees

That day in June 2018, Nathan’s partner Patrick Burke had a “really bad feeling.” When he couldn’t reach his girlfriend, he called the police five times, begging for support.

“But there is no magic button that the police department can press that notifies gun stores in a mental health emergency,” Brees says.

“This is why I’m so passionate about creating this little piece of legislation that has the potential of letting families like ours feel like we did everything, and also for the gun dealer.”

Her mom had “severe tremors at the time. How could anybody sell a gun to someone who couldn’t even hold a fork?”

Brees even called the gun shop and told the owner what had happened after she had found his business card in her mother’s car. She said she asked him if she could return the gun. “He said, ‘All sales are final,’ and hung up.” 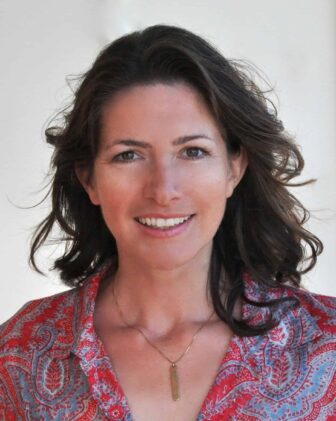 Since then, she had learned from police that another family had called that store begging them not to sell a gun to their son who was in the midst of a mental health crisis. According to Brees, their son went, bought the gun anyway, and shot himself. “I think this must weigh on the gun store owner as well.”

Brees was not able to prevent her mom from buying a gun. But she can work toward making sure others will have this option, potentially saving their lives.

Michaela Haas, Ph.D., an award-winning author and solutions reporter, is a Contributing Editor at Reasons to be Cheerful, where this article was originally published.