About 100 million Americans weren’t working in early October, according the Census Bureau, and some of the reasons may come as a surprise.

Almost half of the respondents are retired, which is to be expected given the size of the baby boomer generation and the fact that many exited the labour market early during the pandemic. Another 12% were either sick from an illness unrelated to Covid or disabled.

But the coronavirus continues to play an outsized role in keeping workers out of the labour force. The poll implies that 5.6 million people aren’t working because of Covid-19, whether they are ill themselves, caring for someone who’s sick, or they’re concerned about getting or spreading the coronavirus. Others also cite losing their jobs because of the pandemic. 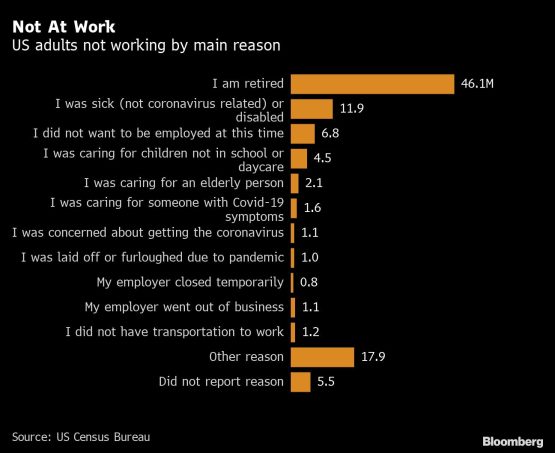 The labor market has remained tight this year even as inflation hit a four-decade high and parts of the economy cooled. Job openings, while off their peaks, are still historically high. Businesses large and small have complained about labour shortages and difficulties to retain staff.

The Census poll, conducted from October 5 to October 17, offers a glimpse into why many stayed on the sidelines.

More than 6 million didn’t have a job because they were caring for a child or elderly person, and another 6.8 million didn’t want to be employed, the survey shows. The lack of transportation was keeping about 1.2 million workers on the sidelines.

The equivalent of 32 million people who aren’t working are relying on savings to cover their needs, including withdrawals from retirement accounts or money from selling assets. Another 26 million are using credit cards or loans and 12 million have been borrowing from family for friends to help meet their expenses, the poll shows.

In addition, more than 20 million are relying on government transfers of some type such as unemployment insurance payments, food stamps or government rental assistance.

The Census allowed for multiple categories to be marked.

The agency started the household pulse survey after Covid-19 hit the US, to provide real-time data on how the pandemic is affected families.