Shares declined in Japan, Hong Kong and Australia after the S&P 500 Index dropped more than 10% below the August high marking the peak of its rally from this year’s low. US contracts and European stock futures fell.

A dollar gauge traded near a record high amid the market jitters while bitcoin dropped below $19 000. The offshore yuan fell to the lowest against the greenback since mid 2020, even after the People’s Bank of China set the daily reference rate for the currency stronger-than-expected for a 20th day.

Fed officials are about to put numbers on the “pain” they’ve been warning of when the central bank publishes new economic projections Wednesday. They’re expected to hike by 75 basis points again, according to the vast majority of analysts surveyed by Bloomberg. Only two project a 100 basis points move. 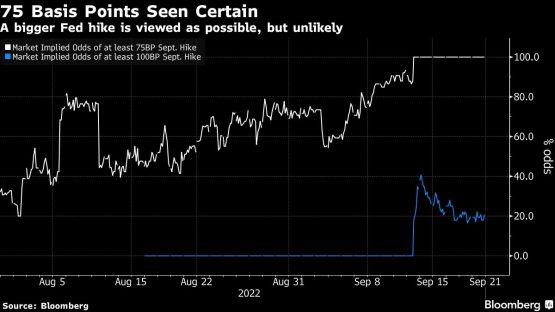 “Volumes remain light and the mood cautious, with few looking to take on large positions before hearing what the Fed says and where policy makers see rates going by the end of the hiking cycle,” said Fiona Cincotta, senior financial markets analyst at City Index. “This is what will drive the markets, not the rate hike tomorrow, but what the Fed plan to do next.”

Nouriel Roubini, who correctly predicted the 2008 financial crisis, sees a “long and ugly” recession occurring at the end of 2022 that could last all of 2023 and a sharp correction in the S&P 500. “Even in a plain vanilla recession, the S&P 500 can fall by 30%,” said the chairman of Roubini Macro Associates. In “a real hard landing,” which he expects, it could fall 40%.

Still, some professional speculators are refusing to surrender to a punishing equity market prone to volatility — boosting bullish and bearish positions at the fastest rate in five years. As the S&P 500 plunged last week, hedge funds snapped up single stocks while betting against the broad market with products like exchange-traded funds, data from Goldman Sachs Group Inc.’s prime brokerage show.

Christopher Smart, chief global strategist for Barings LLC, said equity markets faced further stress from weaker valuations while certain corners of the credit markets remained attractive. “Investment grade and high-yield are places my colleagues are finding a lot of opportunities,” he said on Bloomberg Television. “The fundamentals of the U.S. economy are very strong. They need to weaken a little bit to cool some of these inflation pressures, but you can find a lot of companies that have strong balance sheets.”