More than 40% of corporate decision-makers see an urgent need to overhaul their supply chains in 2023, with inflation, higher interest rates and weaker global trade acting as some of the stiffest economic headwinds, a new survey showed.

Just 11% of respondents in the HSBC Holdings Plc survey said transforming their supply chain wasn’t a priority next year, but 42% plan to do so and almost 47% see it as a priority at some stage in the future. Conducted by the research firm Toluna, the poll covered 2 170 executives at medium-size companies in 14 countries from September 28 to October 24, according to the London-based bank. The survey also showed concerns were broader than supply chains, with 51% of respondents saying their expect the environment for international trade to be harder next year. That lines up with the latest forecasts from the World Trade Organisation for cross-border commerce to grow just 1% next year, after a projected 3.5% increase this year. 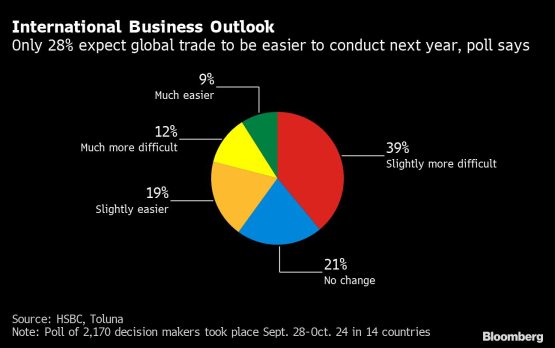 Asked about the biggest impediments to their business next year, 38% cited inflation, 32% pointed to higher interest rates and 27% said an uncertain political environment, the poll showed.

Overall, though, there was plenty of optimism about revenue prospects for the year ahead, according to the survey. More than three-quarters expect sales growth to exceed 10% next year, with 19% of those respondents expecting revenue to increase by more than 20%.

“Businesses are operating in an increasingly complex global economic landscape, navigating a wide range of challenges,” Barry O’Byrne, chief executive of HSBC’s global commercial banking unit, said in a statement. “Despite this, there is a strong sense of global resilience and ambition amongst mid-size businesses.” 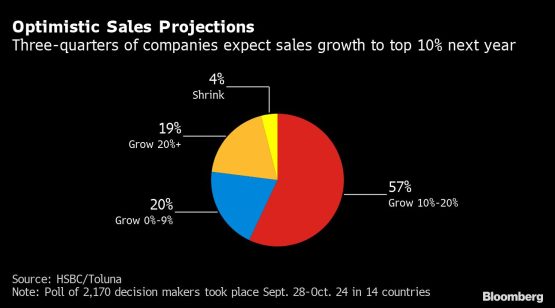 Here’s a breakdown for several countries where supply chains and global trade are especially key:

Indian business leaders are some of the most optimistic about international trade in 2023, with 45% expecting it will be easier, compared with 28% globally. Seven in 10 plan to enter at least one new foreign market, and 58% will focus on making their supply chain more secure.

Almost half will focus on making their supply chain more secure, but 18% are concerned there is a lack of quality suppliers and goods, according to the survey.

Some 65% say they will focus on making their supply chain more sustainable in 2023, but 29% were concerned about a lack of quality suppliers and goods to support a sustainable supply chain.

Similarly, some 80% of respondents will focus on making their supply chain more sustainable, but at the same time 28% are concerned about a lack of quality suppliers and goods.