Global sales of personal computers suffered their worst-ever quarterly decline over the holiday season, with analyst firms Gartner Inc. and International Data Corp. both reporting that shipments fell by around 28%. They also said they don’t expect any significant recovery in the market until 2024.

According to Gartner, global PC shipments slipped by 28.5% to 65.3 million units in the fourth quarter. That was the “largest quarterly shipment decline since Gartner began tracking the PC market in the mid-1990s,” it said. It was worse than the prior quarter, which was previously said to be the worst-ever quarterly drop in shipments.

When looking at the performance of the world’s top PC makers, Gartner’s numbers largely tallied with those reported by IDC, though they differed somewhat with regards to Apple Inc., due to the different methodologies they use. Garter reckoned that Apple suffered a 10.2% decline in shipments to 7 million units, while IDC said the company’s PC sales only fell by 2.1% to 7.5 million units.

The two analyst firms regularly disagree on Apple’s performance, but in the last quarter it was IDC’s numbers that came closest to the ones reported by Apple in its third quarter financial results. Three months ago, Gartner claimed that Apple suffered a 15.6% decline in PC sales, while IDC said its shipments had risen by 40%. Apple appeared to clear up the discrepancy a few weeks later, saying Mac sales hit a new quarterly record, with revenue up 24%.

Gartner and IDC’s numbers were a lot closer in relation to the industry’s other leading manufacturers. For instance, Gartner said Lenovo Group Ltd. suffered a 28.6% decline in PC shipments to 15.6 million units, whereas IDC said its shipments were down 28.5% to 15.5 million. 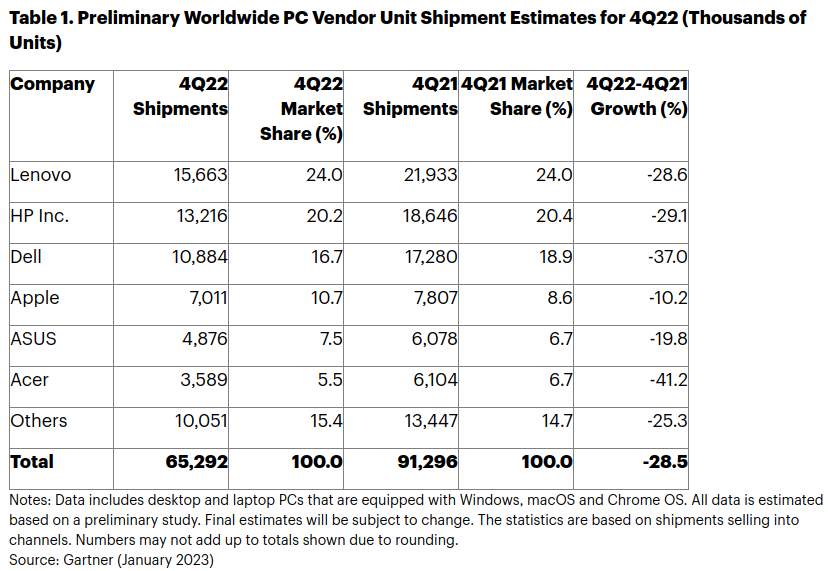 Gartner analyst Mikako Kitagawa said that anticipation of a global recession, increased inflation and higher interest rates resulted in a major drop in demand for PCs. “Since many consumers already have relatively new PCs that were purchased during the pandemic, a lack of affordability is superseding any motivation to buy, causing consumer PC demand to drop to its lowest level in years,” he said. “PC demand among enterprises began declining in the third quarter of 2022, but the market has now shifted from softness to deterioration. Enterprise buyers are extending PC life cycles and delaying purchases, meaning the business market will likely not return to growth until 2024.”

Worse still, IDC said that PC manufacturers are earning less money for the machines that they do manage to sell. “Average selling prices across many channels also fell as excess channel inventory over the course of the past few months triggered discounting in an effort to spur demand,” explained IDC Research Manager Jitess Ubrani.

It should be noted that the past year’s slowdown in sales reflects a tough comparison to 2021, which was one of the best years for the PC market in decades. That year, sales were boosted significantly by individuals and companies alike investing in new PCs for remote work.