Businesses, consumers and markets in the advanced economies seem to have adjusted to the idea that recession is coming.

The chairman of the US Federal Reserve [Jerome Powell] meanwhile, has stopped talking about soft economic landings. For their part, UK politicians are no longer telling us they can use borrowed money to ramp up spending and cut taxes while inflation is at four-decade highs. So, encouragingly, policymakers are now helping to create a sense of realism.

History shows us that coming to terms with economic realities is important – in the past, false hope has only created further misallocation of resources. And, while all might feel very gloomy right now, an acceptance of the challenges ahead does help create the best possible conditions to take action to ease inflationary pressures. These pressures won’t ease immediately, but by the end of 2023, we might be in a position to start imagining interest rates coming down again.

Falling interest rates would be the payback for taming inflation and the restoration of price stability, which is so important for businesses to plan and invest sensibly. Lower rates would also afford consumers some relief from a cost of living crisis of historic proportions. For investors, it might allow a recovery in valuations – albeit all bets could be off should geopolitical fault lines opened up following Russia’s invasion of Ukraine deepen, and/or relations between the US and China sour again.

The price of taming inflation

Deteriorating geopolitics might very well take the world in a more ‘stagflationary’ direction than we envisage.

Stagflation describes a situation where growth is low or slowing at the same time as inflation remains high or rising. And, should labour markets remain in rude health (higher unemployment is, unfortunately, required to restore price stability) we can’t rule out ‘wage price spirals’ further stoking inflation and depressing growth. Both of these scenarios might necessitate even higher interest rates.

But the acceptance of coming recession seems key at this point in time, even if the consequences of recession are yet to be felt. Some 85 000 lay-offs by US technology companies (according to the Crunchbase website) have given us a sense of the pain to come. The price of taming inflation will be quite a slowdown in economic growth and an increase in unemployment. Central banks in advanced economies have rapidly increased interest rates in recent months, with the objective of cooling demand and quelling price increases.

And a sharp contraction in the US economy will be required to create the slack, or spare capacity, necessary to tame wages, prices and inflation. We expect this will entail unemployment rising above NAIRU (the non-accelerating inflation rate of unemployment, estimated at 4.5% for the US) in Q2 2023, with the unemployment rate hitting 7% at the end of next year – around double the current rate. We’ve arrived at this conclusion by studying previous economic cycles, these being the periods of time in which an economy moves from a state of expansion to one of contraction before expanding again.

Our analysis back to the 1960s shows that when US inflation was previously at current levels it always required a fall in GDP of up to 4% in order to restore price stability.

No two cycles are the same, but even with improvements in policymaking and more flexible labour markets, this could still amount to a 2% loss of GDP.

So there’s going to have to be a reset in 2023, when we expect US GDP to fall by 1% (see table, below). This projection sets us apart from the crowd, with the ‘consensus’ among all forecasters for the economy to grow by 0.2%. It also explains our slightly more modest outlook for global growth at 1.3% in 2023, as we see the US act as a greater offset to strong growth in emerging markets, and China especially. One of the challenging features of this economic cycle is that the pandemic has affected labour supply – in the UK, for example, nearly 600,000 people have left the jobs market, which is a figure closer to 2 million in the US. Consequently, despite the slowdown already seen in advanced economies labour markets remain tight and workers in short supply. These circumstances mean we have seen a sharp slowdown in US productivity growth, now running at its weakest level on record (see chart, below). The resulting rise in unit labour costs would, under normal circumstances, have resulted in increased lay-offs and redundancies, which has not yet occurred.

We believe that companies have been reluctant to shed labour, concerned it will be hard to recruit when growth revives. So far they have been able to pass on higher costs (energy, materials and labour) in higher prices, compounding the inflationary pressures. 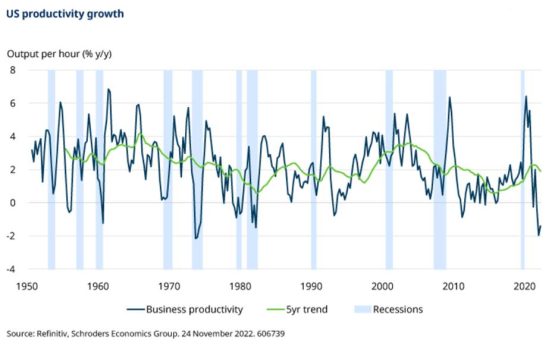 The central banks are aiming to change this by bearing down on demand, making it more difficult for business to pass on costs and forcing them to restructure. So far the effect has been limited to the technology sector which expanded massively during the pandemic and is now adjusting to a weaker level of activity.  However, in the economy as a whole, the level of lay-offs remains low, albeit rising. Companies are still in expansion mode in terms of hiring and employment, as can be seen in the US payrolls and jobs reports.

We expect the US federal funds rate to peak at the target range 4.5-4.75% in Q1 2023. This is predicated on the view that after two more rate hikes the cumulative impact of tighter policy will be sufficient to trigger the required change in corporate behaviour. Businesses will see their margins squeezed, lay-offs will rise and the labour market cool. Although headline inflation will still be above target at the point which NAIRU is achieved, we expect hitting this key objective will be sufficient for the Fed to go on hold. It could prelude interest rate cuts later in the year as the recession deepens.

For investors, we could see the return to more familiar territory where equities offer attractive opportunities in recessions. A 1% decline in US GDP tracks through to a 14% drop in US corporate profits next year, we expect. So, that’s a dismal picture for corporate earnings; however, valuations begin to recover due to central banks cutting interest rates in response to the worsening growth and (improving) inflation landscape.

We don’t though anticipate the other advanced economy central banks outside of the US to ‘pivot’ towards cutting rates in  2023.  Measures of core inflation – which strip out volatile items including oil and food to give a clearer picture of underlying price trends – may have already peaked in the US, but remain on upward trajectories in the UK and Europe. This may complicate effort by the European Central Bank (ECB) and Bank of England (BoE) to bring inflation back towards targets around the 2% mark. Core inflation has continued to rise in part as European energy prices have come off sharply since the summer, supporting demand.

We expect the growth outlook to quickly deteriorate, however, as the ECB and BoE continue raising rates until early 2023, and then keep them on hold for the remainder of 2023. Recent months have shown us that we can’t rule out further surprises. The dangers were clearly illustrated, for instance, by a collapse in demand for UK government gilts as the country’s fiscal policy veered into the unknown, feeding through into much higher UK mortgage costs.

Central banks have accumulated large quantities of government bonds through successive quantitative easing (QE) programmes over the past decade and a half to inject money into the financial system and support economies. These stocks are now gradually being sold back into the market in the process of ‘quantitative tightening’, or QT. This will further raise borrowing costs for households and businesses – and countries which have relied on QE to help finance their deficits. These countries are now reliant on overseas bond investors to stand in and fill funding gaps left by QT.

Avoid repeating mistakes of past

We’ll be looking around the world as to which countries might be vulnerable and which are the strongest ‘sovereigns’ with the better financial positions. This is occurring at a time when interest payments are now becoming very significant for the most heavily indebted countries and putting public finances under further stress.

The outcome could well create a more difficult dynamic between the governments and the central banks, as long as the banks remain focussed on price stability and enjoy the required independence to get inflation under control. Central banks will want to resist political pressure and not repeat the mistakes of past when they’ve cut interest rates too soon, only to have to start hiking again as inflation returned.

Keith Wade is chief economist and strategist at Schroders