Global bonds rebounded in November, adding a record $2.8 trillion in market value, as investors bet that central banks are getting a grip on inflation. But how long the party lasts is another matter.

Government and investment-grade corporate debt securities have risen to a market value of $59.2 trillion from $56.4 trillion at the end of October, making for the biggest monthly increase in a Bloomberg index stretching back to 1990. The gauge — which fell into a bear market in September — rebounded after US inflation cooled more than expected and the Federal Reserve indicated a possible slowdown of aggressive rate hikes, buoying sentiment. “We are starting to see a number of economic indicators that point to the fact that inflation has peaked or is peaking,” said Omar Slim, a fixed-income portfolio manager at PineBridge Investments in Singapore. While trading in US Treasuries is likely to be volatile amid economic data and Fed rhetoric, the bond market rally “has legs,” he said.

Expectations for a Fed pivot have grown ever since softer inflation data earlier this month spurred a massive relief rally across asset classes, reviving a bond market languishing in its worst rout in a generation. But with the threat of recession looming, a recovery won’t be smooth.

Strategists at Goldman Sachs Group Inc. expect US and European corporate bond spreads — which have recently narrowed — to widen in the first quarter of 2023 as central banks continue to raise rates, before tightening again as a soft-landing for the US economy becomes clearer. They see US investment-grade corporate bond spreads peaking at 180 basis points and ending the year at 150 basis points. For 2023, “we expect low, but positive, excess returns, while total returns will likely feature a far more pronounced improvement in performance” after this year’s historic plunge in bond prices, strategists at the bank including Lotfi Karoui wrote in a note this week.

In Europe, investors are also betting on a better year, with spreads declining sharply of late. Yield premiums for euro-denominated corporate bonds have tightened for six consecutive weeks and are now flirting with their lowest level in six months on optimism that rate hikes will slow and amid a rush by investors to capture some of the highest yields in a decade.

Safer company debt in the common currency has become a top trading idea for next year, with strategists at UBS Group AG predicting better returns from the asset class than for European stocks or German government bonds.

And in Asia, high-grade dollar credit spreads have widened by less than their US peers this year. Some in the region — including PineBridge’s Slim — reckon that the region’s better-rated credits such as sovereigns or quasi-sovereign entities like utilities may be an opportunity heading into 2023, given their stable fundamentals.

Stronger growth in Asia, loose central bank policy in China and Japan, and a sizable drop-off in dollar issuance in the region are all supportive of credit, though investors have to be selective, he said. 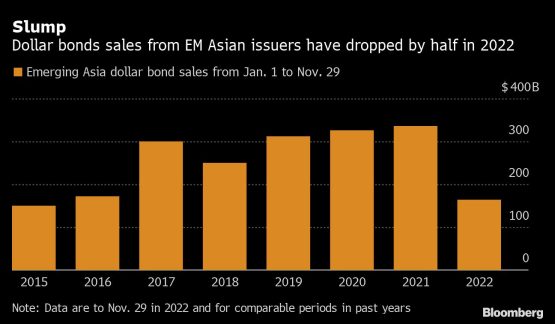 But not all investors are convinced that recent gains mark a long-lasting turnaround.

Nicholas Elfner, co-head of research at Breckinridge Capital Advisors, is less optimistic about the US avoiding a recession. He is keeping an eye on the shape of the yield curve and its inverted front end, which suggests investors are anticipating a significant slowdown and that Fed policy is probably a little too tight, he said.

High-grade credit spreads tend to historically peak around 175-200 basis points in a mild recession and between 200-250 basis point in a full-blown recession, said Elfner. While rates volatility may have peaked, credit spreads have not if the economic scenario suggested by the yield curve plays out, he said.

But even if credit spreads do widen in 2023, an almost-tripling in global investment-grade corporate bond yields in the past 12 months gives investor returns a far bigger cushion to absorb such a move.

A crucial data point will come in mid-December, with the final Fed announcement of the year. Key payrolls and inflation data will be watched before then for clues about the central bank’s path forward and its implications for the bond market recovery. And as for November’s rebound: “The market was a bit over-hedged so it didn’t really take much in terms of relatively good news in order to get this snapback rally,” Boothe said. “I would not expect this to persist.”

Dollar bond deals in Asia were scarce on Wednesday, with only one notable issuer from China mandating for a new offering, reflecting broader caution ahead of a key speech by Fed Chair Jerome Powell later in the day.

Issuers continued to seize the final window for bond issuance in Europe’s primary market this year, with Orsted, Toyota and Vodafone among the borrowers raising new debt.