Germany’s government expects that substituting Russian gas could cost the country some €46 billion ($45.4 billion), according to a report published by parliament.

The figure largely depends on the development of gas prices, the Economy Ministry wrote in a response to questions from the far-right opposition party AfD. The report didn’t specify which period of time the cost estimate was referring to.

“Volatile gas prices on the spot market, where parts of the required quantities have to be procured, are of particular importance,” it said. 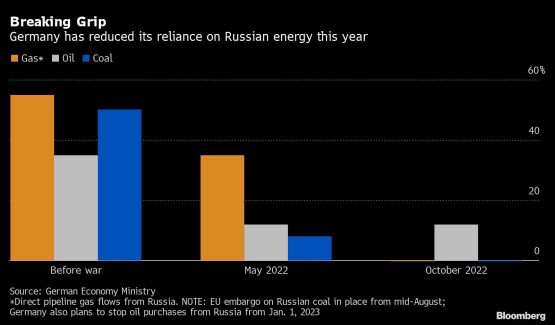 Since Russia curtailed gas shipments to Europe over the summer, Germany has scrambled to find alternatives. The government said Moscow’s pipeline gas is currently being replaced via higher volumes from Norway, as well as more purchases of liquefied natural gas from countries including the US, Qatar, Algeria and other parts of Africa.

It’s also preparing the infrastructure for five new floating LNG terminals, but can’t yet estimate costs for these projects as they vary according to location and stages of development.