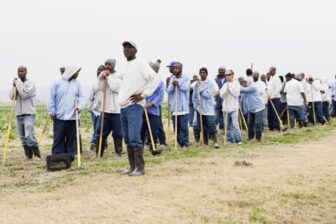 Jimmy Jackson (front) with a work crew at Angola prison. Photo by Ron Levine/Prisoners of Age

Nationally, slavery is still legal in the United States for people in prison.

That’s due to the 13th Amendment, which abolished slavery but left an exception in place for the slavery of people convicted of crimes.

Now, voters in Tennessee, Alabama, Louisiana, Oregon, and Vermont will all consider ballot measures in November to change their state constitutions and override the 13th Amendment’s exception allowing slavery and involuntary servitude as a punishment for a crime, formally abolishing all forms of slavery within their states, Kelly Kasulis Cho reports for the Washington Post. Three states have already passed similar legislation, including Nebraska, Utah and Colorado.

A similar measure failed earlier this year in California due to concerns about whether eliminating the exception would force the state to pay prisoners minimum wage.