Finance Minister Enoch Godongwana is set to take up a key question investors are asking about the nation’s crisis-ridden power utility when he presents his second mid-term budget, as the government devises a plan for how to deal with the company’s R413 billion debt.

An expected announcement on Wednesday may shed light on a long-awaited transfer of a portion of Eskom’s liabilities to the National Treasury, part of an effort to ensure the struggling utility becomes sustainable. Most economists polled by Bloomberg forecast the government will absorb half the burden.

The decision will shape the revised fiscal framework for the next three years that Godongwana will unveil to parliament at 2 pm. At stake is the ability to stabilise debt as spending demands grow at a time when sluggish economic growth and mounting price pressures pose a threat to stability in one of the world’s most unequal societies. 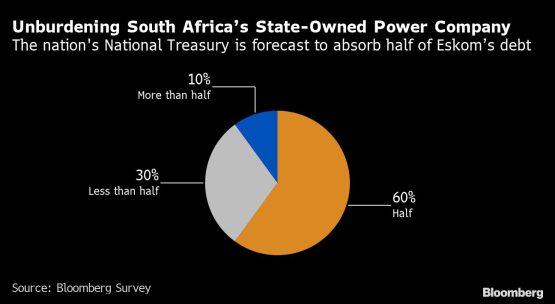 “While the transfer of debt from Eskom to the sovereign would result in a further deterioration in fiscal metrics, it could well be the only choice available to shore up the power utility’s finances and the country’s economic prospects,” PwC said in a research note.

Gina Schoeman, an economist at Citibank South Africa and Andrea Masia, a senior economist at RMB Morgan Stanley, project the transfer will happen in the fiscal year through March 2024. Goldman Sachs Group Inc. economists said they expect the operation will have “a neutral effect on total public and publicly guaranteed debt.”

Better-than-expected tax collection — and a boost in nominal gross domestic product as a result of an uptick in inflation — may lead to a reduction in fiscal-deficit and debt projections as a percentage of economic output.

Yet these gains may prove short-lived without measures to improve lacklustre economic growth and place distressed state‐owned companies on a sound footing.

South Africa’s debt levels are projected to undershoot the Treasury’s February estimates in the fiscal year through March 2023, according to a median estimate of 11 economists. But risks still abound for the improving outlook and the Treasury’s forecast that the ratio of gross debt to GDP will peak at 75.1% in 2024-25. Complicating the picture is the higher-than-budgeted pay demands by public servants, as well as calls for a temporary jobless stipend to be extended.

South Africa is also facing demands for additional funding from state‐owned companies and possible climate-financing loans to transition away from coal.

The median estimate of 12 economists is for a shortfall of 5.1% of GDP in the fiscal year through March 2023, compared with the Treasury’s February view of a gap of 6%. The outcome may have been even better had it not been for havoc around state-owned Transnet. Issues from wage strikes at its ports to cable theft and suspected sabotage of its rail network have prompted mining companies to stockpile supplies.

The mining industry could have generated another R100 billion in revenue, an amount that would have produced an extra R27 billion in taxes, “were it not for capacity constraints on Transnet rail and ports,” Busi Mavuso, the chief executive officer of lobby group Business Leadership South Africa, said in a note earlier this month.

State workers’ salaries, which make up almost a third of budget expenditure, also continue to cloud the fiscal outlook. A failure to clinch a new three-year pay deal with labor groups that represent about 1.3 million civil servants could add to spending pressures. A revised 3% pay raise, from an initial 1.5% — combined with the continuation of a non-pensionable cash allowance of R1,000 a month — was rejected by the majority of unions representing civil servants.

The final settlement may come in at about 10%, pushing the government wage bill toward R695 billion or 10% of GDP and making it the second-largest item in the budget, Michael Kafe, an analyst at Barclays Bank Plc, said in a research note.

The Treasury is forecast to cut its February real GDP growth estimates for this year and next, in part a reflection of a global slowdown, high inflation and rampant unemployment. “With global and domestic slowdown risks increasing in the near term, and elevated debt ratios leaving less room for complacency, South Africa will face tough policy trade-offs as it formulates its medium-term fiscal plans,” Razia Khan, who heads research for Africa and the Middle East at Standard Chartered Bank in London, said in a report.