South Africa’s credit ratings are at their lowest levels since they were first assigned almost three decades ago. Moody’s Investors Service and S&P Global Ratings are both due to publish reviews Friday, with Fitch Ratings expected to follow soon after. 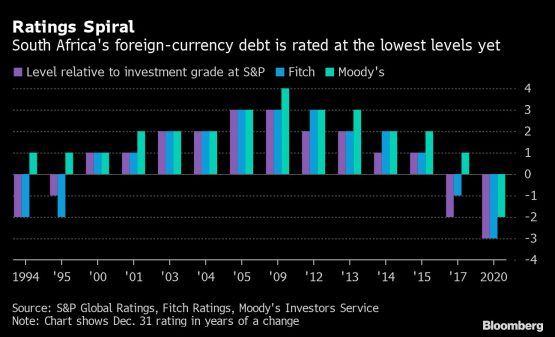 Questions about pending debt relief for power company Eskom will only be answered in February. There’s also uncertainty over how the government will respond to pleas for increased support from other state companies, higher-than-budgeted pay demands by civil servants, calls to expand the social welfare net, and a potential deterioration in South Africa’s terms of trade and global economic prospects.

“Better fiscal numbers are offset by global and local risks as well as slow progress on energy and transport reforms,” said Sanisha Packirisamy, an economist at Momentum Investments. “As such, we expect no change from the rating agencies at the upcoming reviews.”

Ratings companies are also expected to adopt a wait-and-see approach ahead of the governing African National Congress’s elective conference next month. President Cyril Ramaphosa, who is considered business- and market-friendly, is widely expected to seek — and win — a second term as party leader, although his party has yet to announce the candidates who’ve met the nominations thresholds to contest top posts.

If “politics and policy keep on improving” the three companies may all upgrade their outlooks to positive around March, Johann Els, chief economist at Old Mutual Investment Group, said in an interview.

Still, the government has a long way to go to return debt — now seen peaking at 71.4% of gross domestic product in the current fiscal year — to levels of about 30% that were last seen before the global financial crisis, and to stabilise the budget shortfall at about 3% of GDP, according to Els.