Storm season is in full swing in the Atlantic. Despite the Caribbean and southern United States being on full alert, Hurricane Ian has still torn a path of large-scale destruction through these regions.

Financial markets have also been particularly stormy. September 2022 will be remembered for market turmoil amid a global surge in interest rates. It will also be remembered as a time when the UK behaved like an emerging market.

The backdrop is that central banks around the world continue to raise interest rates to combat inflation.

Thirty-three central banks hiked rates in September, following 20 in August and 37 in July. World Bank data suggests this is the most synchronised hiking cycle across the globe on record.

Inflation remains elevated in most major economies, despite the falling oil price providing some relief. In particular, it remains too high for the liking of the US Federal Reserve, the world’s most important central bank. Its preferred inflation measure, the core personal consumption deflator, rose 4.9% year-on-year in August, well above the target of average inflation of 2%.

The Fed hiked its policy rate by 75 basis points for the third time in a row in September and lifted the projections for where it expects its policy interest rate will be at year-end to 4.5%. That is a dramatic jump from almost 0% at the start of the year and is significantly higher than what the market had priced in until fairly recently.

Even more important is that the projection is rhetoric, with Fed chair Jerome Powell and his senior officials reiterating that they are determined to get inflation back down to 2% and that rates would have to be in restrictive territory for some time to avoid a premature declaration of victory.

Moreover, not only are they prepared to sacrifice economic growth and employment to achieve this goal, but weaker growth and a decline in job creation would be necessary to get there.

With the US economy still relatively strong, and rates expected to keep rising, the dollar has been a natural beneficiary. The trade-weighted dollar index has gained 17% so far this year, including a 7% jump in the third quarter. The most notable casualty has been the British pound, falling to as low as $1.03, a level it has only hit before once briefly in March 1985. 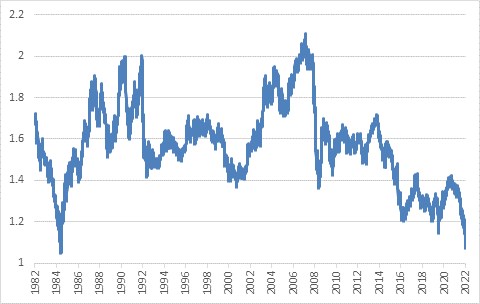 While inflation is a global problem, not all countries face the same underlying inflation dynamic.

However, given the dominance of the dollar in global trade, commerce and finance, all countries must respond to its strength irrespective of their domestic inflation situation, and this usually means higher interest rates.

Famously, back in 1971, then US Treasury secretary John Connally (who incidentally was seriously wounded when President Kennedy was assassinated eight years earlier) told an audience of European counterparts that the dollar “is our currency but your problem”. This remains the case today.

The Fed makes policy for America, but the fallout is global.

One way to shield yourself against a surging dollar is to intervene in the currency market. But this rarely works since the foreign exchange market is massive, with trillions of dollars of turnover per day. Intervening often amounts to whistling against the wind.

Japan’s Ministry of Finance has been involved in the market to prevent the yen from falling beyond ¥145 per dollar, but with the Bank of Japan still committed to zero rates, this seems unlikely to work beyond the very short term. Chinese authorities, also facing a sharp decline of the tightly managed yuan against the dollar, are resorting to “open mouth operations” by warning that speculators should not bet on “one-way appreciation or depreciation of the yuan, as losses will definitely be incurred in the long term”.

The best way to shield yourself against this fallout is to manage your affairs well, while a bit of luck also helps.

In the case of South Africa, the luck is that partly due to high coal prices the country runs a trade surplus, generating more hard currency than it needs to pay for imports.

In an environment of scarce and expensive dollars, deficit countries can run into big trouble. Even worse is when you are a deficit country that also has dollar debt that needs to be serviced. These countries can be forced to make tough choices between paying creditors or importing food and medicine as the recent case of Sri Lanka showed.

South Africa has little foreign debt and considerable foreign assets, so the rand’s decline against the dollar is not a huge concern from a macroeconomic point of view.

While it will make imports more expensive, this pass-through from rand depreciation to domestic has declined materially over the years. Moreover, the rand has gained against the pound and euro over the past year, even as it lost almost 20% against the greenback.

In Britain, sensible policymaking seems to have gone out of the window, and we’re not referring to the ongoing cost of Brexit.

The central bank, the Bank of England, has been hiking rates in response to near-double digit inflation. However, the administration of new Prime Minister Liz Truss announced a massive fiscal package that includes £60 billion to shield households from surging energy prices, and £45 billion in tax cuts. Moreover, the entire package is debt-funded.

In other words, while the Bank of England is trying to reduce demand to lower inflation, the government is going in the opposite direction.

The bond market reaction was predictable but severe, with prices falling and yields rising rapidly. In turn, this volatility caused major problems since many pension funds used bonds as collateral for their derivative exposures. Facing margin calls, they became forced sellers of bonds, driving prices even lower and yields higher, and leading to further margin calls. The Bank of England had no choice but to intervene, otherwise a financial catastrophe could have ensued.

It announced a two-week programme of buying £65 billion in bonds to restore stability to the market.

While necessary, this step is completely at odds with its stated aim of tightening policy. In fact, it was planning to start selling bonds soon to shrink its balance sheet. No wonder then that the pound crashed while the FTSE 100 Index fell below 7 000 points, a level it first crossed in 1999.

While the UK is no longer an economic superpower, London remains the main global financial centre along with New York, and therefore investors everywhere took note.

The chaos in the UK completely overshadowed another potentially significant event in Europe, the Italian election that resulted in a victory for right-wing euro sceptics.

Italy is the third largest economy in the Eurozone and the most indebted one. If it was to bail out of the single currency, it would be disastrous for the entire region. Fortunately, even populist politicians now seem to realise this would be a bad idea and the gap between Italian and safe-haven German bond yields has not widened to worrying levels yet, as was the case during the 2011/12 Eurozone debt crisis.

But the spread is nonetheless widening, raising the funding costs for the Italian government at a time of economic stress. The possibility of a Russian defeat, unthinkable at the start of the invasion, is growing. But with that comes the growing risk that a cornered and humiliated Putin lashes out by attacking a Nato member or deploying nuclear weapons.

War, rising rates and growing recession risk is not a good combination for equity markets.

The global benchmark MSCI All Country World Index is in bear market territory, having lost 25% this year, with September alone contributing a 8% decline. The strong dollar has contributed to lower returns at an index level by depressing contributions from outside the US.

Global asset classes in 2022 in US dollars Normally, bonds would be a beneficiary of risk aversion and positioning for weaker growth, but central bank policy is dominating. The global benchmark 10-year US Treasury yield hit a 14-year high of 3.9% before retracing somewhat to end the month at 3.7%. At the start of the year, it was trading at 1.4%. Because yields were so low to begin with, the substantial capital loss was not offset by interest income.

In contrast, SA bond prices have also been under pressure, but overall returns have been buoyed by high interest income.

Global bonds have therefore lost 15% in dollars so far in 2022, a historically bad result, but the benchmark is very diverse, covering government and corporate bonds of varying maturities and credit ratings. There are corners of the bond market that have fared much worse, particularly long-duration bonds. While normally a cushion to equity volatility, bonds compounded the pain this year.

US dollar cash has been the place to be, but was yielding virtually nothing at the start of the year and was therefore not obviously attractive. It is only recently that cash yields have moved to respectable levels. Euro or sterling cash have lost more than 15% in dollars because of their collapsing currencies.

From the point of view of rand-based South African investors, the picture is somewhat better, largely because the 13% year-to-date decline in the rand against the dollar offsets some of the falls in global markets.

As noted earlier, SA bond returns in rand terms have benefitted from high starting yields, though they are modestly negative this year. South African equities have also not escaped the global sell-off, but the 7% year-to-date decline is still far from bear market territory when viewed in rand terms. When something is on sale, you rather want to be a buyer than a seller. Certainly, in the case of developed market fixed income, there are decent yields for the first time in more than a decade.

For global equities, the forward price-earnings (PE) ratio on the benchmark MSCI All Country World Index was 14 at the end of September, slightly below the long-term average though certainly not dirt cheap. However, beneath this aggregate are many countries, sectors and individual firms that are already priced for recession and trade at a big discount.

Locally, the equity market trades on very attractive valuations, a single digit PE ratio and a dividend yield of 4.5%. This gives us a significant margin of safety even in a scenario where growth weakens. Local bonds trade at yields more than double any reasonable expectation of inflation over the next few years, and therefore offer the prospect of attractive real returns for patient investors.

Storms do pass, as do financial and economic storms.

In the case of the former, the evidence is clear: blue skies return, water subsides, and stillness descends. In the case of the latter, unfortunately, we don’t ever know until well after the fact. What makes it even more difficult is that markets anticipate improvement, and therefore can rally even while things look dire. This is bound to be the case this time too, though we have no way of knowing when.

What we do know is that missing out on such recovery rallies is very detrimental to long-term returns.

The old adage of ‘time in the markets, not timing the markets’ therefore remains true, though is always easier said than done.

Investors can prepare for financial tempests by being appropriately diversified and tilting portfolios to cheaper asset classes where a significant margin of safety already exists (that is, more bad news is already priced in) but then it is simply a case of sticking to the plan and riding out the storm.

Izak Odendaal is an investment strategist at Old Mutual Wealth