The Federal Reserve and the Bank of England may both unleash 75 basis-point interest-rate hikes in the coming days in a show of aggression toward inflation, even in the face of mounting recession risks.

The transatlantic double act illustrates the trade-off confronting central banks as evidence of an impending global economic contraction becomes harder to ignore, even as inflation lingers.

For the Fed, the fourth such out-sized move on Wednesday will bring it to a crossroads. The damage to growth inflicted by policy tightening is no longer being masked by the buoyancy of the post-pandemic economy, while its success in taming inflation has yet to materialise.

The BOE’s situation on Thursday is even less comfortable as it delivers what would be the biggest UK rate hike since 1989. Not only is the country probably already in a recession, but officials are also trying to reestablish the credibility of the UK’s framework after former Prime Minister Liz Truss’s unfunded fiscal plan led to a disastrous market crisis. 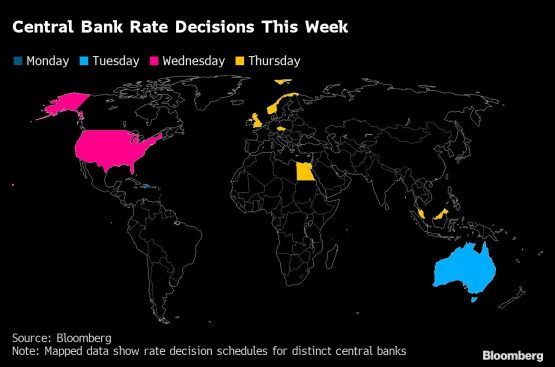 For each central bank, the week’s action is likely to be only a stepping stone toward even higher borrowing costs. Economists surveyed by Bloomberg reckon Fed rates will reach 5% by March, while the BOE may keep raising to settle above 4%.

Then again, recession worries could still temper policy makers’ enthusiasm for forceful hiking. That’s what happened with the Bank of Canada, which hiked rates by a less-than-expected 50 basis points.

In the US, many economists will look to the labor market for evidence of a deepening slowdown. Nonfarm payrolls due on Friday may show the economy added 190,000 jobs in October, the smallest addition since President Joe Biden’s administration began in January 2021.

“With the architects of the chaos no longer in power and the risk premium on UK assets fading, the pressure on the BOE to act aggressively has eased.”

Elsewhere this week, a likely slowdown in euro-zone growth, possible rate hikes from Norway to Australia, and a renewed surge in Turkish inflation will keep financial markets busy.

China releases PMI reports for October on Monday, with a pullback expected.

Market watchers will closely scrutinize the release of intervention figures out late Monday to see how much Japan spent to prop up the yen in October, as the currency still hovers near 32-year lows.

Australia’s central bank chief Philip Lowe is set to raise rates again on Tuesday as inflation continues to heat up faster than expected by economists. Still, the RBA is more likely to opt for another quarter-percentage point hike, as it factors in concerns over the impact on households and businesses of raising rates too quickly. 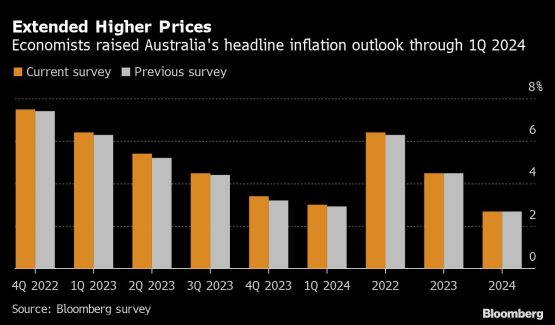 South Korea’s export figures will give an early sign of how global commerce fared in October and how seriously the cratering won is widening the country’s trade deficit.

Inflation figures the following day will show if price growth is continuing to cool as the Bank of Korea hikes rates.

Hong Kong will likely follow the Fed in raising borrowing costs, and commercial banks may follow suit by increasing their prime rates for the second time since September — another blow to consumer and business spending.

Malaysia’s central bank is also expected to raise its key rate for a fourth straight meeting.

Whether or not euro zone data on Monday show the economy grew in the third quarter, it’s likely to be the worst performance since early 2021, when the pandemic was still raging. The report may still fare better than what will follow: economists reckon a recession has taken hold during the current three-month period.

Inflation data due concurrently will illustrate the cost shock bearing down on the region’s growth prospects, with the pace of consumer prices seen accelerating to a euro-area record of 10.3%. Various European Central Bank speakers will make public remarks, days after they raised rates by 75 basis points. Among them are Chief Economist Philip Lane on Monday and President Christine Lagarde, who’ll speak while visiting the Baltic region later in the week. Lagarde on Saturday tweeted that defeating inflation “is our mantra, our mission, our mandate.”

In the UK, the first full week of Prime Minister Rishi Sunak’s tenure s likely to feature continuing speculation on spending cuts that may be unveiled in mid-November. Meanwhile, just as the BOE raises rates again, evidence of the damaging impact on home-loan approvals will emerge in data on Monday.

Other central-bank decisions on Thursday include that from Norges Bank, which is likely to raise rates by at least a quarter-point. Recent faster-than-expected inflation data has fueled speculation that Norway’s central bank could opt for a fourth straight half-point hike.

In Poland, inflation data on Monday may help determine whether central bankers will resume rate hikes. An acceleration to a new high of 17.8% is forecast by economists.

Looking south, Saudi Arabia — the fastest growing economy in the Group of 20 — will announce its third-quarter growth figures on Monday, as it reaps the benefits of higher energy prices and urgently seeks to funnel money into building an economy that can thrive beyond oil.

In Kenya, data on Monday will likely show inflation slowed for the first time in seven months. It’s still expected to be above the top end of the central bank’s 2.5% to 7.5% target range and remain there until at least the first quarter of 2023, which could prompt a rate increase next month.

Turkish inflation on Thursday will probably show another increase, to 86%, as the central bank’s unorthodox policy makes its benchmark rate increasingly irrelevant. The bank cut to 10.5% this month, giving Turkey the lowest negative real interest rate in the world. President Recep Tayyip Erdogan has asked for a single-digit rate by year end as he looks ahead to an election in mid-2023.

Mexico gets the week rolling Monday with its flash third-quarter output report. Analysts expect quarter-on-quarter readings to again print lower after slowing to 0.9% in the three months through June. GDP remains below its pre-pandemic level. Brazil’s central bank on Monday reports budget figures, followed a day later by the minutes of its October 25-26 meeting. The decision to keep the key rate at 13.75% for a second meeting came as no surprise, but the dramatic bout of deflation rippling through the economy will have Brazil watchers on high alert for any new forward guidance.

Reports on industrial production data and monthly trade are also due this week, while the outcome of Sunday’s presidential election is sure to focus investors.

In Peru, Lima inflation figures for October are expected to ease after an uptick in September, while economic activity data from Chile may show that the economy contracted in the third quarter.

Colombia reports September unemployment and exports ahead of the minutes of the central bank’s October meeting. Confronting the fastest inflation in 23 years, policy makers on October 28 raised the key rate for a 10th straight meeting, to 11%.

Analysts surveyed by the central bank see another half-point hike at the bank’s December meeting and a year-end inflation rate of 11.88%.