The Hang Seng China Enterprises Index climbed as much as 4.2% on Tuesday morning. It rose nearly 2% in the previous session, taking gains from a recent low on October 31 to more than 20% and meeting the common definition of a technical bull market. The Hang Seng Index, Hong Kong’s benchmark, was poised to hit the milestone as it rose as much as 3.6% Tuesday.

The rally marks a sharp reversal of sentiment toward a market that was still mired in pessimism late last month when President Xi Jinping’s precedent-defying power grab stoked concern about ideology trumping pragmatism. The conclusion of the major Communist Party congress at that time also triggered worries that Beijing would stick to a Covid Zero policy that has weighed on the world’s No. 2 economy.

But an acceleration of of moves to ease a cash crunch in the real estate sector, as well as a relaxation of virus curbs in the past week have surprised investors, signaling that reviving economic growth has returned as a policy priority. Also brightening the mood was Monday’s meeting between Xi and Joe Biden that generated hopes of warmer ties between the two superpowers. Investors continued to snap up stocks even after data showed China’s economy slowing in October, with industrial output missing expectations and retail sales contracting for the first time since May.

“The initial reaction to the China macro data seems positive despite them coming in below expectations, which may boost the probability of more easing measures in the near term,” said Marvin Chen, a Bloomberg Intelligence analyst.

In a sign of continued policy support, China’s central bank said it sought to maintain ample cash levels in its financial system with liquidity tools of different maturities. The People’s Bank of China partly extended a key policy loan due Tuesday but added that liquidity infusion this month, which was done with a combination of short-, medium- and long-term tools, exceeded the 1 trillion yuan ($142 billion) maturity.

In addition to property stocks, Chinese tech firms also joined the party as expectations grew that the worst may be over for some of the industry’s major players. The Hang Seng Tech Index jumped as much as 6.7% Tuesday, with Alibabaup a maximum 11%.

Investors are betting that the Chinese tech giant may finally see its fortunes turn around after a rough 2022 plagued by a 40% slump in the shares and rare sell calls from Wall Street analysts. Alibaba is expected to return to sales growth in the September quarter when it reports earnings on Thursday, following its first-ever drop for the prior period. 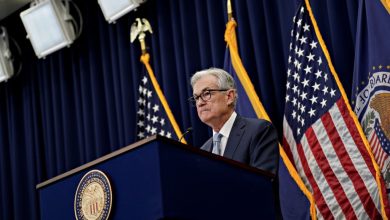