The European Union saw a record-amount of solar power generation this summer, saving the continent from even higher reliance on expensive fossil fuels amid the worst energy crisis in decades.

Solar panels produced about 12% of the EU’s electricity from May to August, power that would have cost as much as 29 billion euros ($28.9 billion) had it been produced by natural gas-burning plants, according to analysis from climate think-tank Ember. The figures underscore the crucial role that renewable energy sources will play in Europe’s efforts to cut reliance on imported and polluting fuels in the coming months and years.

“Investments in solar capacity have paid off,” said Pawel Czyzak, analyst at Ember. “Every terawatt hour of solar electricity helped reduce our gas consumption, saving billions for European citizens. It’s clear that we need as much solar power as we can get.”

Solar generation hit 99.4 terawatt hours in the summer months, up 28% from a year earlier, the Ember analysis showed. That saved roughly 20 billion cubic meters of natural gas for power generation. The EU is seeking to leverage its renewables generation further by limiting the excess revenues of companies producing power from sources other than gas and sending the profits back to consumers. 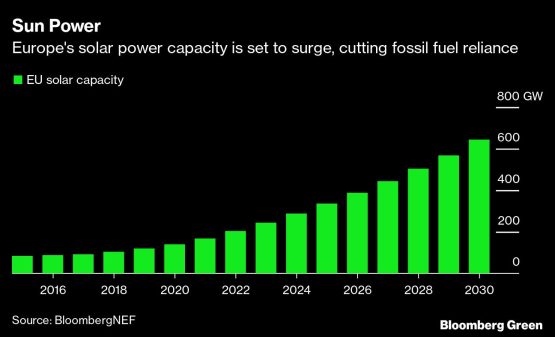 Developers are building new solar farms across Europe at a pace that will likely mean the electricity they produce will break records every summer for at least the next decade.

This summer saw surging demand as Europe suffered from a blistering heat wave that pushed up demand for cooling. At the same time, much of France’s nuclear reactors were shut for maintenance, depriving the grid of one of the continent’s most important sources of low carbon electricity. The relentless heat and drought conditions also dried up waterways that support hydro power, another key alternative to gas and coal power.

Solar won’t do as much good this winter when the days are shorter. Then it will be much more up to the less predictable wind to fill in the gap.