It’s December in Europe, and the temperature is dropping. People have the heating on as they cook dinner, run the washing machine, watch television. But in France, the grid operator is running out of options to keep the lights on.

The utility has issued a “red” alert, meaning supplies are at their limit. It’s already cut off some big industrial users and reduced voltage, and even sent out a mass request to households to curb their electricity usage.

Many comply, but it’s crunch time. The operator needs to take the drastic step of shutting down power in some places to avoid a total collapse of the system.

It’s a dramatic scenario, but one that governments across Europe are preparing for as the energy squeeze that’s gripped the continent gets worse with each passing week. On Wednesday, France’s Reseau de Transport d’Electricite said that it will probably have to ask the country to cut consumption several times this winter to avoid rolling blackouts. Finland also ramped up its warnings about outages.

The heightened alert follows Russia’s move to halt gas supplies through the key Nord Stream pipeline, further raising the prospect of a shortage of gas to heat homes and generate electricity. Vladimir Putin has repeatedly reduced flows to Europe this year, retaliation for sanctions imposed after his country’s invasion of Ukraine.

There are plenty of recent precedents. Texas’s grid went down in 2021 during cold weather, leaving millions without power for days. California came close to such a situation this month during extreme heat.

South Africa is no stranger to rolling blackouts, largely due to years of underinvestment and maintenance neglect. They’re scheduled in different areas at specific times when state company Eskom can’t guarantee enough power.

While residents there are experienced in getting on with daily life, the interruptions can be highly disruptive, paralyzing appliances, shutting off wi-fi and disabling traffic signals. The Chinon Nuclear Power Plant in Avoine. In France, a 1-degree Celsius drop typically boosts power demand by about 2 400 megawatts, the output of about two of its 56 nuclear reactors. Image: Nathan Laine/Bloomberg

For Europe, much will hinge on the weather over the coming months. Small swings in temperature can radically change power needs. In France, a 1-degree Celsius drop typically boosts power demand by about 2 400 megawatts, the output of about two of its 56 nuclear reactors.

“If we have a really extreme winter, it would have as deleterious an impact on our grid as it did for Texas,” said Adam Bell, a consultant who previously led energy strategy at the UK Department for Business, Energy and Industrial Strategy. “Anything people can do now to lower their demand will help the overall cause.”

The European Commission on Wednesday proposed a regulation calling on governments to cut overall electricity usage by 10%, as well as a 5% mandatory reduction during peak hours. 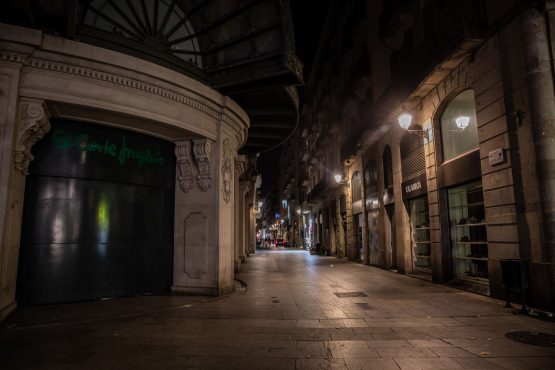 Retail stores with the main lighting switched off following rules requiring businesses to turn off their lights at night, in Barcelona, Spain, on August 10. Image: Angel Garcia/Bloomberg

Analysts at Goldman Sachs Group Inc. said in a report that “the more reductions we see, especially in summer, in gas consumption, the less likely Europe is to face blackouts.”

But some government aid measures may add to the problem. Price caps aimed at helping consumers and businesses cope with soaring prices reduce incentives to lower consumption.

Other factors are also at play. France, traditionally Europe’s largest electricity exporter, may have to import large amounts of power this winter as Electricite de France SA grapples with the reduced reliability of its aging nuclear fleet. A dry summer has affected hydro power across Europe, including in Norway, also traditionally a large exporter.

If the crisis escalates, cutting power to homes is a last resort, and there are a range of options that authorities will take first.

The easiest have already started. Governments have recommended turning down thermostats and taking shorter showers, and are reducing their own consumption by lowering temperatures in public pools and turning off outside lighting on public buildings at night.

The usual next step is for large energy-intensive companies, many of whom already have pre-arranged agreements with governments, to reduce usage or shut down.

After that, the choices become even more unpalatable.

In France’s case, the Ecowatt system allows people to monitor forecasts for power supply and demand days ahead, with three levels: green, orange and red. If the grid operator expects the situation to become critical, it will issue an alert the evening before.

“In rare cases where all electricity needs cannot be covered, local, controlled outages lasting a maximum of 2 hours could be organized,” the EcoWatt web site says.

Scheduled power losses, while bad, are still better than uncontrolled blackouts because of unrelenting strains on supplies. They allow operators to limit outages, rather than be plunged into a chaotic situation where it takes days to get everything back up and running. There are similar processes in place elsewhere. If the emergency plan is triggered in the UK, it would first ask households and industries to try to save energy. The next step would be for large energy-intensive companies to shut down.

Recent evidence from California suggests such measures work. On Sept. 6, the state’s Office of Emergency Services declared its highest grid emergency level, then sent a text alert: “Turn off or reduce nonessential power if health allows, now until 9 p.m.”

Within minutes, power usage dropped. The emergency was later canceled without any blackouts. The Brandenburg Gate with lights off on the first day a new law to save energy nationwide came into effect in Berlin, Germany, on September 1. Image: Carsten Koall/Getty Images

France has published its own estimates in an effort to encourage compliance with such requests. If every household were to turn off one light bulb, that would save as much as 600 megawatts, the equivalent of the consumption of 600,000 inhabitants.

“Overall, the message to reduce demand across Europe now doesn’t seem to be hitting home yet,” said Simone Tagliapietra, a fellow at Bruegel think tank in Brussels. “Just walk around our cities — you still see supermarkets closed at night with lights on. We are simply not there yet.”