Ethical debt deals are set to become the majority in Europe’s market for corporate loans for the first time next year.

Bankers expect at least half of the loan deals for investment-grade firms in Europe, the Middle East and Africa to be tied to environmental, social and governance targets in 2023, based on interviews conducted by Bloomberg. That’s a jump from an already record 36% share this year, as pressure grows for firms to show investors their sustainability credentials.

“If we project this for 2023 and the dynamic remains the same, we may reach 50% in the course of next year,” said Agnes Gourc, head of sustainable capital markets with BNP Paribas SA, one of the world’s top arrangers of such debt. Firms are putting greater emphasis on raising ethical debt amid a push from regulators to force banks to pay closer attention to ESG. This can mean discounts on loans if they meet certain targets such as reducing pollution or food waste, though some of these deals have come under scrutiny for being overly soft or for not disclosing specific goals.

“ESG targets should be linked to the material ESG issues of the clients, which are in many cases not limited to CO2 emissions,” said Robert Spruijt, head of sustainable finance for EMEA with ING Groep NV. “It is important that the KPI structures also address this wider scope.”

Issuance of high-grade sustainability-linked loans in the EMEA region has reached €142 billion ($147 billion) so far this year, closing in on 2021’s record €168 billion volume, according to data compiled by Bloomberg. There’s been growth in the niche German Schuldschein market, a kind of debt similar to loans, where ESG-linked transactions now form about 37% of sales and are also projected to reach 50% next year.

Progress has been slower in the leveraged sustainability-linked loans market, where issuance has slumped to just €17 billion from €42 billion last year.

“We expect it will take a bit longer to get to the same level for the leverage market,” said BNP Paribas’ Gourc. 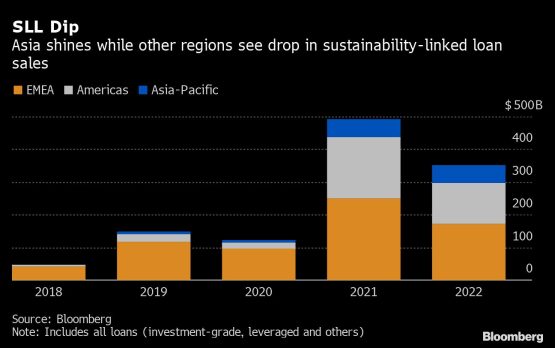 It’s been a tough year globally for sustainability-linked loans after exponential growth in recent years. Worldwide sales have fallen to $362 billion, from a record $506 billion in 2021. Firms are taking on less debt due to rising interest rates, inflation and a strong dollar, said Nneka Chike-Obi, Asia Pacific head of ESG research at Sustainable Fitch.

The Americas saw a 35% drop in SLLs to $123 billion, with US investment-grade companies raising nearly two-thirds of that. Asia bucked the slowdown with a record $56 billion of sales — yet that still only forms 13% of the region’s loans activity and is comparatively tiny compared to the EMEA region.

Nonetheless, a growing awareness of ESG issues is expected to spur the development of the market, even if that doesn’t necessarily translate to surging volumes overall.

“We keep seeing the increasing trend in the market that clients put sustainability higher on the agenda and want to embed sustainability characteristics in their financing,” said ING’s Spruijt.