A surging dollar is now the only possible hedge for what’s turning into the biggest destruction of shareholder value since the global financial crisis.

With global equities having already lost $23 trillion this year, the US currency’s inverse relationship with risk assets makes it the only game in town for at least the rest of of 2022, according to Citigroup Inc. Canadian Imperial Bank of Commerce says the dollar is set to keep rising, while Brown Brothers Harriman & Co. says the global backdrop continues to favour the US currency. 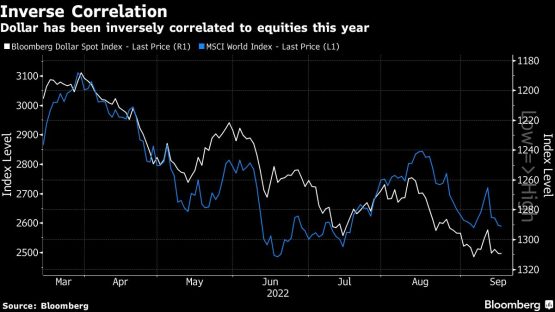 “The only place to hide is in US dollar cash,” Citi strategists including Jamie Fahy and Adam Pickett wrote in a research note Thursday. It would take a “deep recession” to push US inflation significantly lower, implying a prolonged drop in corporate profits and equities before the Federal Reserve pivots, they said.

The Bloomberg Dollar Spot Index, which tracks the US currency against 10 global peers, has surged more than 11% this year, set for a record annual performance in data compiled by Bloomberg starting in 2004.

Evidence of the havoc caused by the appreciating dollar has been spelled out across currency markets this week. The greenback powered ahead after quicker-than-expected US inflation data on Tuesday saw traders boost Fed rate-hike bets once again, dragging down global risk sentiment.

The yen, already languishing at a 24-year low, tumbled to within a whisker of the closely-watched 145 per dollar level, while China’s yuan slid beyond 7, and the Canadian currency dropped to the weakest in almost two years. The Australian dollar is on the brink of a new multi-year low. Strategists say there’s unlikely to be any relief from the dollar’s dominance just yet.

“The repricing of Fed tightening risks is likely to keep the dollar bid across the board near-term,” Win Thin, head of currency strategy at Brown Brothers Harriman in New York, wrote in a note. “As we said during this most recent dollar correction lower, nothing has really changed fundamentally and the global backdrop continues to favor the dollar and US assets in general.”

CIBC agrees it is too soon to write off dollar strength.

“The real policy rate is still deeply negative and financial conditions are too loose,” said Bipan Rai, head of foreign-exchange strategy at CIBC in Toronto. “The market has priced some of this in, but there’s enough of a question mark with respect to where the terminal rests that should keep the USD well supported.”

Citi forecasts the Intercontinental Exchange Inc.’s US dollar index, which is already at a two-decade high, will climb about another 2% in the next three months.

“We have outlined ad nauseam that the end of the USD bull-run will require either a Fed pivot evidenced via bull-steepening in the US rates curve or a bottoming in global growth expectations,” the Citi strategists wrote. “These could be themes for 2023, but not today.”