The dollar weakened against most of its Group-of-10 counterparts and Japanese stocks climbed amid subdued trading on Monday, with many major centers in Asia closed for Lunar New Year celebrations.

The Topix index jumped more than 1% while Australian shares inched higher. US equity futures were marginally lower after a surge on Friday, when the S&P 500 Index rose for the first time in four days and the tech-heavy Nasdaq 100 saw the biggest one-day gain since November, thanks in part to gains by Google parent Alphabet and Netflix. Contracts for European stocks climbed.

Treasuries were little changed in Asia while bond yields moved higher in Australia and New Zealand, tracking moves in the US debt market on Friday.

Japan’s benchmark 10-year yield fell one-and-a-half basis points to 0.385%, well below the 0.5% ceiling set by policy makers, after the Bank of Japan said it would provide ¥1 trillion yen ($7.7 billion) of collateralised loans for banks in a bid to limit a rise in rates. The yen reversed earlier gains against the greenback.

“The Bank of Japan will continue to be that central bank that stands on its own and tries to almost sing its own tune,” Katrina Ell, an economist at Moody’s Analytics Inc., said on Bloomberg Television. “Domestic demand in Japan still is incredibly soft, so they are trying to resist that tightening urge that we’ve seen from other developed and even developing economies.” 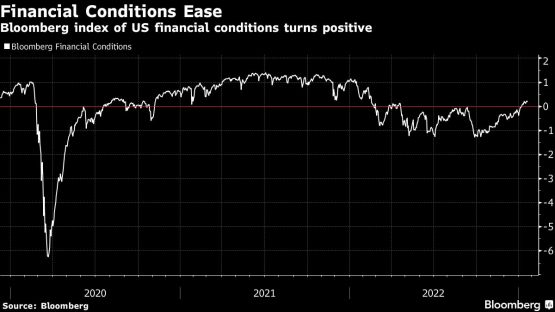 Yet as optimism rises, US financial conditions have become less restrictive, raising another potential challenge to efforts to tame inflation that may give policy makers reason to rethink their views.

IG Markets Inc. analyst Hebe Chen said traders are “trying to downplay the fundamental shortcomings” in the outlook. She doesn’t expect the Fed to cut rates this year, she said on Bloomberg Television. Chen also cautioned that while China’s reopening is positive, this won’t fix all the problems its economy faces, including troubles in the property sector.

New Zealand’s shares benchmark fell and the nation’s currency fluctuated after the Labour Party endorsed a replacement for Jacinda Ardern as prime minister. The new leader, Chris Hipkins, is expected to prioritize the economy as a recession looms after a series of sharp interest rate hikes.

Financial markets trading in Asian hours is likely to be thinner than usual with major centers including Hong Kong, Shanghai, Singapore and Seoul closed for Lunar New Year celebrations Monday. Many regional markets will remain closed until midweek and mainland China trading won’t resume until January 30.

Here are some of the main market moves: