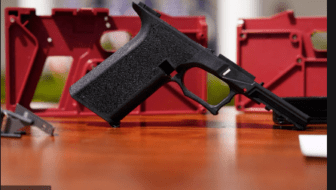 Even as thousands of untraceable guns bearing the branding stamp of Polymer80, one of the country’s most prolific manufacturers of ghost gun kits and parts, continue to turn up at crime scenes from Los Angeles to Baltimore, the owner of the company has vowed to keep manufacturing the parts, reports ProPublica.

A bill up for debate in Nevada would have banned ghost guns and the parts used to make them, but, thanks to a strategically chosen court venue in rural Nevada, and the aid of a major New York law firm, Polymer80 won a decision vacating the section of law that would have halted its business.

While it is now illegal to assemble or possess a ghost gun in Nevada, it remains legal to possess and transport the components of a ghost gun. According to court documents, the vast majority of ghost guns recovered by law enforcement nationwide are built from Polymer80 parts which, thanks to the Nevada decision, continue to flow from the company to the rest of the country.

However, Polymer80’s victory in the Nevada court does not obviate the legal threat it faces elsewhere, including lawsuits from big-city mayors trying to stem gun violence.

For example, a pending Baltimore lawsuit seeks to hold the company accountable for the street violence perpetrated by people using Polymer80 kits to circumvent federal and state gun laws that require a background check to purchase a firearm and a license to own a handgun.

And Bronx News 12 reports that, under an executive order from President Joe Biden, ghost guns will no longer be legal to sell and all gun kits nationwide will have to carry serial numbers, like any other firearm. Existing ghost guns will not be impacted. Gun rights groups have argued the regulations are not likely to succeed.

To avoid Biden’s requirement, Polymer80 designed “unfinished” frames, which are about 80 percent complete and can still easily be assembled into a functioning firearm.