The commercial bail bond industry exploits the U.S. legal system to earn billions of dollars in profits while providing little benefit to the public, charges the Prison Policy Initiative (PPI).

Calling it a “broken system…in which bail bond companies extract money from defendants and waste court resources without providing meaningful services in exchange,” PPI, a nonprofit think tank which researches corrections, said the system was too entangled with state regulators, legislators and the courts to be fixed through reforms.

“Rolling back all of the laws the industry has lobbied for would be nearly impossible, especially in the face of its immense political influence,” wrote Wendy Sherman, author of the policy paper, entitled, “All Profit: No Risk: How the Bail Industry Exploits the Legal System.”

“Instead of trying to ‘fix’ a broken money bail system, or continuing to subsidize private bail companies, counties should implement alternatives to money bail.”

The aim, she wrote, should be to “eliminate money bail entirely.”

Although some states have moved to end the system, some form of money bail is still in use in more than 40 states. 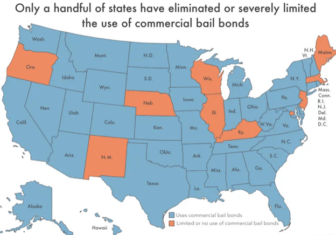 But even as many states have moved to implement reforms, hardline critics have used the historic increase in crime rates in 2020 to drive a campaign to reverse them—arguing that relaxed bail laws endanger public safety.

Most criminologists say there is little evidence supporting those assertions.

Sherman concentrated on what she said were questionable procedures the bail industry followed to deal with “forfeitures”—the money owed to the courts when a defendant fails to appear for a court date, thereby forfeiting the bond.

In at least 28 states, jurisdictions have reported serious problems with bond forfeitures, she wrote.

“The audits and investigative reports we compiled describe loopholes in the bail forfeiture process that bond agents and surety companies exploit to avoid paying huge sums owed to the courts — ranging from hundreds of thousands to millions of dollars,” Sherman wrote.

U.S. courts use bail to release people charged with an offense from custody before trial. Judges can set a financial condition for pretrial release—a “bail” amount that would have to be paid if the defendant fails to appear in court.

Bail amounts are usually set by published schedules based on the offense, and defendants are required to put down a percentage of the total to secure the bail, so they can go home. .But often the bail is set too high for many defendants or their families—at which point a commercial bond agent steps in to write a “surety” bond on their behalf.

The defendant pays a nonrefundable premium—usually 10 percent of the total bond—to the bond company, which undertakes to pay the full amount if the court date is not met. In some cases, defendants must provide collateral, such as title to a car or home.

Under the system, the bond company is not required to put up any cash on its own—just a promissory note to pay the full amount if bail is forfeited.

[Defendants able to come up with the required percentage without the services of a bail bondsman will be refunded if the court date is met.]

The system in theory saves taxpayers money by allowing more people to stay out of jail, and saves court costs by avoiding trial delays. 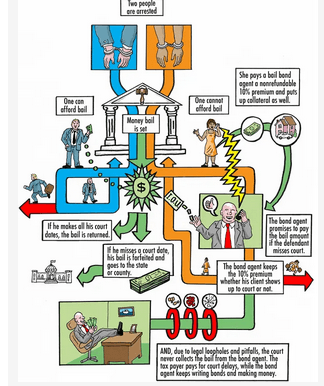 The bail industry maintains that the risks of forfeiture justify the profits it takes from premiums, and argues its services are key to the efficient working of the courts, and to maintaining public safety.

But Sherman cites research which suggests the monetary obligation of a bond rarely determines whether a defendant makes the trial date. Other factors, such as a family emergency, a sickness, or work issue are bigger contributing factors; and in those cases, court officers are dispatched to get the defendant to court.

Illinois became the first state to eliminate all forms of money bail in 2021. And at least 10 other states, including California and New York. have instituted significant changes.

But the system remains firmly entrenched in many states, even as jurisdictions often realize limited benefit, said Sherman, who cited numerous examples where commercial bail firms have been able to avoid paying the cost of forfeitures when clients miss court dates.

In Dallas County, Texas, for instance, journalists found bail bond agents owed at least $35 million in unpaid forfeitures; yet the county Bail Bond Board ‘[had] not revoked any bail bondsman’s license for nonpayment in recent years.’

Painting a grim portrait of an industry that works “hand in glove” with insurance companies and legislatures to “block reforms that would hurt their bottom line,” Sherman argued it was a “systemic” problem rather than one confined to a few local jurisdictions.

It is “dysfunctional by design, benefitting the commercial bail bond industry far more than its clients or the public, “she wrote.

Sherman said jurisdictions could take some interim steps to give the system greater accountability.

The ultimate goal of eliminating money bail can only be achieved with a nationwide effort, Sherman argues.

“All reform efforts to reduce the use of money bail face enormous resistance from the bail industry, which has successfully blocked popular bail reform efforts across the country,” she wrote.

“…A major fight to end cash bail is more feasible than rolling back dozens of separate procedural advantages across 41 states and thousands of counties.”

Next Wave of Bail Reform Goes Beyond Money Bail, Vera Institute of Justice 2019.

What Have We Learned? What’s Next? Report of Bail Reform Conference at John Jay College, May 13, 2022.

This summary was prepared by TCR editor Stephen Handelman

Alabama To Free Hundreds Of Inmates