China’s delayed economic data showed a mixed recovery in the third quarter, with unemployment rising and retail sales weakening in September despite a pickup in growth.

Gross domestic product grew 3.9% in the July-to-September period from a year ago, rebounding from almost stagnant growth in the second quarter when Shanghai was still in lockdown. The figure was stronger than the median estimate of 3.3% in a Bloomberg survey of economists.

The data were postponed by nearly a week as the country held its 20th party congress — a key political event during which President Xi Jinping secured a third term as head of the ruling Communist Party and consolidated his power. 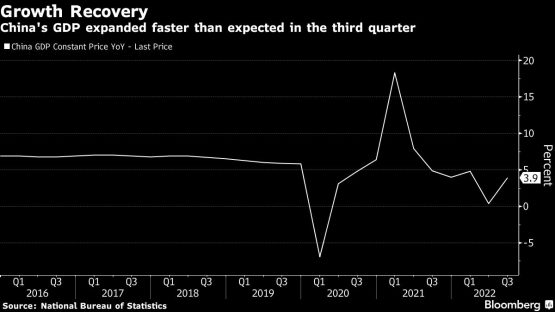 The monthly indicators for September painted a weaker picture. After four months of declines, unemployment rose to 5.5% in September from 5.3% in August. Retail sales growth slowed to 2.5%, compared to August’s 5.4% increase and lower than the 3% estimated.

Industrial production rose 6.3% in September from a year earlier, more than August’s 4.2% rise and beating the 4.8% forecast from economists. Fixed-asset investment rose 5.9% in the first nine months of the year, mainly in line with expectations.

The “biggest takeaway” is that “Covid is still driving the economy,” said Iris Pang, chief economist for Greater China at ING Groep NV, noting the recovery was largely based in investment and industrial production. Markets tumbled on Monday as investors reacted to Xi’s move to stack the nation’s leadership ranks– unveiled at the party congress over the weekend — with loyalists. The benchmark CSI 300 index extended declines to as much as 1.9% as of 10:25 am in Shanghai, while the onshore yuan weakened 0.4% to 7.2541 per dollar.

The real estate sector contracted for a fifth straight quarter, according to NBS industry output data, extending its longest slump in history.

Home prices fell for a thirteenth consecutive month in September. Property investment declined 8% in the first nine months of 2022 from the same time period a year ago, deepening the slump from August. Despite government policies to support the market, many debt-laden developers are still struggling to complete projects, while the confidence that homebuyers have in future home prices has plunged to the lowest on record. The country also released trade data Monday showing export growth slowing in September. Exports in US dollar terms expanded 5.7% last month from a year earlier, down from 7.1% in August, while imports rose 0.3%, unchanged from the prior month. That data was also delayed by the party congress.

High frequency data for this month points to continued weakness, with new home sales in the top 30 cities dropping 21% from last year during the week ending October 18, according to Citigroup Inc. Subway usage was 20% below the pre-pandemic level last week, basically unchanged from the level at the end of September, while export shipping prices dropped further, suggesting softening global demand. Tourism revenue from the week-long national holiday earlier this month indicated a drop of 26% from last year’s levels.

“There’s more going on in China’s economy than the rebound depicted by the overshoot in third-quarter GDP growth — and it’s not a healthy picture. Consumption decelerated sharply in the final month of the quarter, property investment continued to contract significantly, and unemployment rose unexpectedly. Slowing exports pointed to weakening support from external demand.”

China’s economy in the third quarter was threatened by a smattering of smaller Covid outbreaks across the nation that resulted in mobility curbs and which dampened consumer and business confidence. However during a speech after the close of the congress, Xi said China’s economy is “resilient” and vowed to deepen economic ties with other countries.

The economy has come under immense pressure, with economists now forecasting growth of just 3.3% for all of 2022 — far lower than an official target of about 5.5% set earlier this year. Officials began downplaying that goal in recent months as it slipped out of reach, instead focusing on job stability and other metrics.

Officials on Monday touted the recovery of “main indicators,” which “have recovered and steadied to remain within a reasonable range,” the NBS said in a statement accompanying the data for GDP, retail sales, industrial production and other figures.