China’s economic activity slumped in November and could drop further in coming weeks as Covid outbreaks spread across the country and protests against tighter virus restrictions escalate.

Bloomberg’s aggregate index of eight early indicators showed a likely contraction in activity in November from an already subdued pace in October. With Covid cases spreading rapidly in each of China’s provinces now and major cities like Guangzhou, Beijing and Zhengzhou imposing new restrictions to limit residents’ movements, the outlook remains grim.

Economists at Goldman Sachs Group Inc., Macquarie Group and Hang Seng Bank say chances are rising of more disruption to growth as authorities struggle to minimise Covid infections and deaths while gradually easing restrictions. Demonstrations erupted in cities like Beijing and Shanghai over the weekend as residents vented anger against the virus controls. 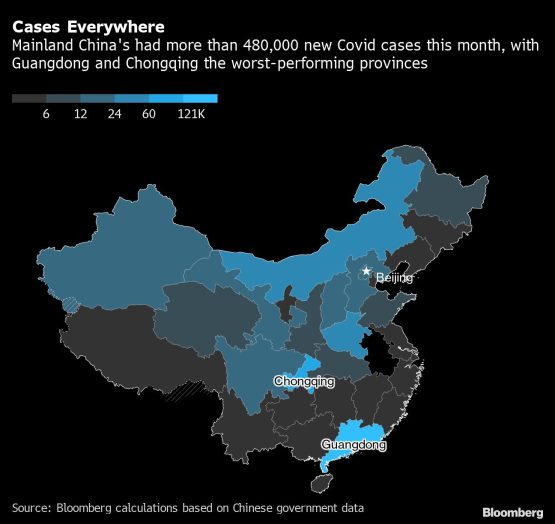 The central bank is ramping up its stimulus to bolster economic growth as analysts downgrade their forecasts further. The economy is expected to expand just 3.3% this year, the latest Bloomberg survey shows, which would be the slowest pace since the 1970s, excluding 2020’s pandemic slump.

The People’s Bank of China said Friday it will reduce the reserve requirement ratio for banks by 25 basis points effective next week. That would inject 500 billion yuan ($70 billion) of liquidity into the economy, enabling banks to extend more loans to businesses hit by Covid disruptions.

More concerted steps have also been taken recently to bolster the property market, currently in its worst downturn on record. Bloomberg’s early indicator index was at 3 in November, the lowest level since April and May, when the economy almost ground to a halt during Shanghai’s lockdown.

Small businesses are already feeling the damage. Service industries contracted for a second straight month in November, falling to the worst level since May, according to Standard Chartered Plc. Domestically focused firms were worse off than export-orientated companies, and expectations fell too.

Standard Chartered’s survey of more than 500 small and medium enterprises showed that the accommodation and catering sector fell the most in November followed by declines in wholesale and retail, along with real-estate sales.

Homes sales in the top four cities fell more than 30% in the first three weeks of the month, while the value of sales in the top 50 cities continued to decline. Car sales, which have been a bright spot for China’s economy due to government subsidies, are also struggling this month. The restrictions on movement are limiting residents from traveling around the country and within cities. Subway usage has plummeted in places like Beijing, Chongqing and Guangzhou. Only 12,000 trips were made on Chongqing’s subway last Thursday, well below the daily average this year of 2.7 million trips. The spread of the virus is also affecting industrial production. Riots at an iPhone factory in Zhengzhou show the disruption caused when businesses try to maintain operations. Coal output has also been hit as outbreaks spread to some mines in Shaanxi province, according to local reports, and Ordos in Inner Mongolia locks down.

Steel output fell this month and stockpiles rose, according to an industry association, with inventories up more than 50% from the start of the year. Daily production at major steelmakers is well below the recent peak in mid-September.

Sinter plants in Tangshan — China’s major steel-making hub — cut production by 30% for 10 days from Nov. 15, according to researcher Mysteel, while factories in Jiangsu province have also considered imposing reductions, it said. In addition to the slowdown in the domestic economy, overseas demand has started to decline.

Exports and imports both unexpectedly fell last month, and the leading indicator of Korean trade indicates that may have continued this month. Korean imports from China in the first 20 days of the month fell 12.1% from a year ago, while Korean exports to China dropped almost 30%. One bright spot has been the stock market, which has rallied this month after the government eased some Covid restrictions allocated more support to the housing market. However, the benchmark index remains shaky, with stocks sliding on Monday.

Bloomberg Economics generates the overall activity reading by aggregating a three-month weighted average of the monthly changes of eight indicators, which are based on business surveys or market prices.