This week’s blitz of interest rate hikes is unlikely to mark the end of a campaign by central banks to crush inflation even as they run the mounting risk of driving their economies into recession.

From Ulaanbaatar to Washington, many policy makers lifted their benchmark borrowing costs during a three-day window that made clear their chief worry is the strongest run of inflation since the 1980s.

That marks a dramatic step change from a year ago when officials were publicly predicting the pandemic-era spike in prices would soon fade.

The biggest movers included Sweden’s Riksbank, which surprised with a 100 basis-point hike, while the Federal Reserve increased its benchmark by 75 basis points for the third meeting in a row. Indonesia was also more aggressive than expected and Vietnam made a rare move, while Switzerland ended Europe’s experiment with subzero rates.

Read: Inflation is much more destructive once it’s entrenched

Still, Turkey cut rates, Brazil and Norway indicated they may take a time-out from their tightening of monetary policy and the Bank of Japan stood out among developed economies by maintaining ultra-low rates. The Japanese also intervened in markets in a bid to brake the yen’s tumble.

“Central bank tightening is far from over,” said Chua Hak Bin, an economist at Maybank Investment Banking Group in Singapore. “Inflation has probably peaked with easing commodity prices, but wage cost pressures have not subsided which could mean more persistent and sticky core and services inflation.”

The higher rates go, however, the greater the risk that economic growth will slow.

“Just as central banks misread the factors driving inflation in 2021, they may now be underestimating the speed with which inflation could fall as their economies slow,” according to Maurice Obstfeld, a senior fellow at the Peterson Institute for International Economics and a former chief economist at the International Monetary Fund.

Here’s a rundown on the week’s decisions and what may come next:

After taking their key rate to a range of 3% to 3.25%, Fed officials sent a more hawkish signal than previously expected by forecasting a further 1.25 percentage points of tightening before year end.

That prompted Goldman Sachs Group Inc., Bank of America Corp. and others on Wall Street to raise their own forecasts to show another 75-point jump in November and a higher peak in 2023. Speaking of possible pain in the economy, Chair Jerome Powell indicated officials are increasingly willing to tolerate a recession as the price for controlling inflation. Raising rates to 4.5% would cost about 1.7 million jobs, and 5% would mean 2 million fewer jobs, according to Bloomberg Economics.

The Bank of England delivered a second consecutive half-point hike in its battle to bring down inflation. Three officials pushed for the institution to join its global peers in moving at an even quicker pace. 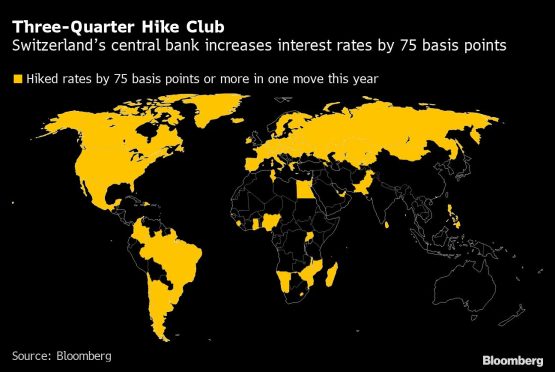 Some had expected an even larger hike, but President Thomas Jordan said “it cannot be ruled out that further increases in the SNB policy rate will be necessary to ensure price stability over the medium term.”

After taking economists by surprise, Sweden’s Riksbank said it will continue to increase borrowing costs in an effort to stem price increases and safeguard confidence in its ability to bring inflation back to the target level.

The bank’s forward guidance indicates a half-point increase in November, followed by a nudge higher in early 2023, taking the policy rate to a high of 2.5%. Some think officials will need to be tougher both in November and beyond.

The central bank raised its key interest rate by a half point, but signaled that its tightening may be nearing an end as officials see the economy responding to their action against inflation. The policy rate of 2.25% is now at the highest since 2011.

Brazil’s central bank held its benchmark at 13.75% after 12 straight hikes. Two officials wanted to tighten again and board members wrote they will stay vigilant on inflation and assess keeping rates steady for a “sufficiently long period” to bring prices to target.

The central bank of Mongolia hiked interest rates to the highest in five years to try and control the fastest inflation since 2017 and halt currency outflows. Inflation should moderate following the shift, Governor Lkhagvasuren Byadran said.

The Philippine central bank raised its policy rate for a fifth time this year to quell inflation pressures amid a slumping currency and a hawkish Fed. Bangko Sentral ng Pilipinas raised the overnight reverse-repurchase rate by 50 basis points to 4.25%. The BSP “will do what’s necessary” to hit a target-consistent inflation path, Governor Felipe Medalla said in a recorded speech.

Taiwan’s central bank increased its benchmark by a modest amount, the third hike this year, as it tries to battle inflation without further weighing down its slowing economy. It lowered its 2022 economic growth forecast for the third time this year. 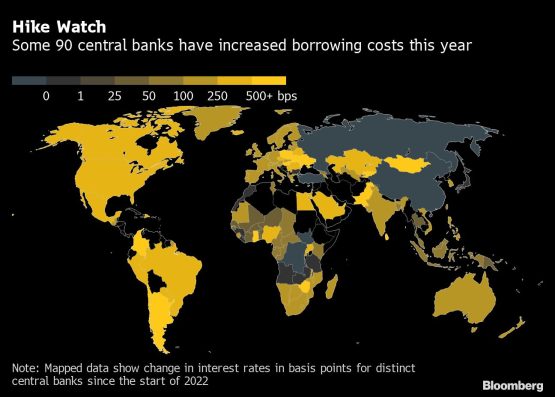 The central bank delivered its bigger-than-expected hike to stem inflation and stabilize the rupiah, marking an aggressive turn for policy makers who were monetary policy outliers until last month. Its seven-day reverse repurchase rate was boosted by 50 basis points, the biggest increment since 2018, to 4.25%. Governor Perry Warjiyo said the bank would take steps to return consumer prices to within its target of 2% to 4% by the second half of 2023.

In a rare tightening move, its central bank will raise two of its policy rates by one percentage point each from Friday after the local currency slumped to a record low. The move came hours after Prime Minister Pham Minh Chinh asked the central bank to consider raising interest rates to support the dong.

The Bank of Japan stuck with its ultra-low rates and Governor Haruhiko Kuroda said there’s little prospect of a near-term rate hike. To add to the drama, authorities stepped into markets to support the yen for the first time since 1998 after its recent slide against the dollar. Turkey’s central bank delivered another shock cut to rates, despite inflation running at a 24-year high and with the lira trading at a record low.

The Monetary Policy Committee led by Governor Sahap Kavcioglu lowered the benchmark to 12% from 13% on Thursday. In a statement accompanying its decision, the central bank said there was a “loss of momentum in economic activity.”

The central bank surprisingly left interest rates unchanged for another meeting, holding off on the global trend as investors await further weakening of the pound and a crucial International Monetary Fund deal. The Monetary Policy Committee maintained the deposit rate at 11.25%.

The Reserve Bank lifted its benchmark by three-quarters of a percentage point for a second straight meeting, fully unwinding its extraordinary pandemic-era stimulus measures, and underlined that it remains prepared to act with urgency to curb inflation.