The number of people searching for lodgers to stay in their spare rooms has spiked, as living costs in Britain remain stubbornly high.

Homeowners advertising empty bedrooms for rent on the website SpareRoom spiked in January, hitting the highest levels since the summer of 2020 when pent-up demand was unleashed by loosening Covid restrictions.

The company said that over half of landlords were renting out rooms because of the increased cost of living, according to a survey of 300 people conducted in November.

SpareRoom predicted that this trend would continue over the “coming weeks and months,” repeating patterns seen following the financial crisis. Inflation in the UK was recorded at 10.5% in December.

“January is often a busy month for lodgers as people take stock and deal with the inevitable financial hangover from Christmas,” said Matt Hutchinson, a director at the company, in an email. “But this year people are feeling the pinch in a much deeper sense.” 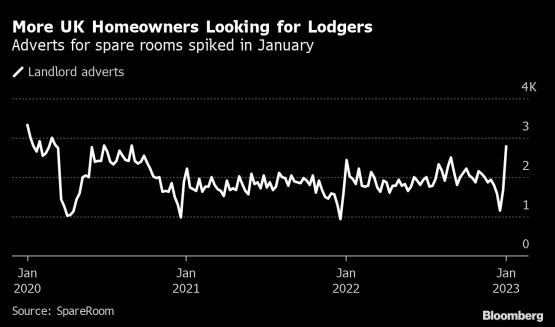 People have also been turning to Airbnb Inc to let out empty rooms in their homes for extra cash. In the second quarter of last year, the company found that a one percentage point increase in inflation corresponded to an increase of nearly four percentage points in the number of hosts.

Although entire homes can be rented out on Airbnb, individual rooms in landlords’ homes are also listed.

“The typical host shares their home for just three nights a month, and four in 10 say the additional income helps them afford their home and rising living costs,” said Amanda Cupples, general manager for the UK and northern Europe at Airbnb.