Saying that “no one should be in jail just for using or possessing marijuana,” President Joe Biden has pardoned people convicted of marijuana possession under federal law, potentially helping thousands with past convictions, reports Charles R. Davis for Insider.

However, while Biden has also encouraged governors to do the same with prisons in their jurisdictions, where the vast majority of those convicted for marijuana possession are held, only 149 people were in federal prison for simple possession of marijuana as of 2021.

The pardon announcement has prodded both praise and calls for continued action Friday.

Rashad Robinson, president of Color of Change, said the announcement was “long overdue for Black and brown communities who have been unjustly convicted for possession crimes at higher rates.”

“For decades, systemically racist laws have criminalized Black and brown people for marijuana possession, upending lives and devastating families and communities,” he said in a a statement to The Crime Report.

Robinson called on the Administration to follow up the move by releasing those currently serving marijuana sentences in federal prison, withdrawing the Reagan-era executive order on drug-testing employees, and halting DEA enforcement of marijuana laws.

“It’s time to turn a new page on the war on drugs,” he said.

Arrests for marijuana possession have dropped sharply since 2009, according to figures provided by The Pew Charitable Trusts’ Public Safety Performance Project. Cannabis accounted for about 37 percent of possession arrests in 2019, compared to 56 percent in 2009. 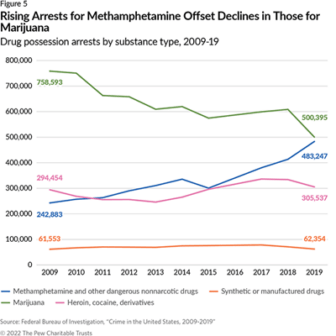 In addition, most of the people serving time for marijuana were convicted of trafficking, with 1,005 behind bars for the offense as of 2021, down from roughly 3,500 in 2015. Some 17,608 people, per the most recent data, slightly more than 30 percent of all federal prisoners, are inside for trafficking convictions, including heroin and cocaine.

Just over 300 people (0.5 percent of the total prison population) are behind bars for any sort of drug possession.

Some 6,500 people were convicted of simple possession between 1992 and 2021, not counting legal permanent residents.

The pardons will also affect people who were convicted under District of Columbia drug laws; officials estimated that number to be in the thousands.

The move will help remove obstacles for people trying to get a job, find housing, apply to college or get federal benefits, and is actually more in line with the positions taken by some state governments, which have already reduced or eliminated the criminal punishments for simply possessing marijuana, according to Michael D. Shear and Zolan Kanno-Youngs for the New York Times.

According to preliminary F.B.I. data, more than 170,800 of the roughly 490,000 drug possession arrests in 2021 were related to marijuana possession.