If it is not Eskom failing, it is the rand falling. On top of the daily domestic struggles, we also face an increasingly unforgiving global environment and evaporating investment returns. What to do about all this gloom?

The one option many are taking is to emigrate. Data on emigration is sketchy, but anecdotally, it has increased – partly because jobs are plentiful in developed countries. The likes of the US, UK, Canada and Australia have near-record levels of job openings. This might not last. Central banks in these countries are aggressively raising rates. The US Federal Reserve specifically wants to see job openings decline to achieve greater balance between supply and demand of labour. In the process, it could result in a recession and rising unemployment. Emigration of skilled South Africans is negative for the economy for a number of reasons, including that it shrinks the tax base.

Some people do come back, often with skills, money and connections they didn’t have previously.

In fact, humans have always been restless and on the move, motivated by push and pull factors. After all, most of us are here because our ancestors moved from other parts of the world over the centuries, whether from the African interior, Indian sub-continent, or Europe (of course some of our ancestors were brought here forcibly as enslaved persons). South Africa continues to be a magnet for immigrants from other African countries, though this is increasingly leading to unhappiness.

The government has theoretically made it easier to attract skilled workers from abroad. In an important step, it published a list of scarce skills that should qualify automatically for work permits. However, in practice getting the necessary paperwork out of the Department of Home Affairs seemingly remains as much a challenge for foreigner workers as for the rest of us.

Not everyone wants to leave the country of their birth and live far away from friends, family and all the emotional connections of ‘home’. With enough money, you can insulate yourself from many of the daily challenges with private healthcare, private education, private security and so on. You can even mostly skip those Home Affairs queues by working through your bank. These private services have the drawback that they often duplicate efforts and certainly duplicate costs. But they are here to stay, and one of the elements of fixing the country will have to be greater cooperation with the public sector. Ideally, for instance, private security should work closely with the police. Enclaves where the affluent completely cut themselves off from the reality the rest of the country experience don’t seem to be a recipe for stability.

Some have taken the route of semigration, moving to parts of the country that are deemed to be better run, notably the Western Cape. This highlights two things.

Firstly, if there are models of good governance in some parts of the country, they can surely be applied elsewhere. The same is true of the many centres of excellence that exist in education, health, science, and other areas.

Secondly, economies are not static things. They are constantly changing and adapting. Entire industries can rise and then disappear as preferences change and technology evolves. People vote with their feet and their wallets. Sandton is now widely known as the ‘richest square mile in Africa’. It took the crown from the Johannesburg CBD. The latter remains a hive of activity, however grimy it may be. It helps that it is much cheaper than Sandton, and now attracts a different kind of business. In market economies, prices rule. If semigration to the Western Cape was to continue unabated, the relative shift in property prices would eventually start pulling people and businesses in other direction.

Much easier than packing up and moving on is simply to spread your financial wings. Today there are very few limits on offshore investing, the main one being the restriction on offshore exposure in retirement funds

There are a couple of investment principles to consider. One is diversification. It simply doesn’t make sense to have all your wealth exposed to a single small country, particularly one where the stock market is very concentrated and exposed to big swings in commodity prices. This has nothing to do with patriotism or politics. Indeed, these considerations should usually be kept far from your portfolio.

What the simplified ‘local versus global’ arguments miss is that not all local is local – many JSE-listed shares are rand hedges – and not all global is equal.

Over the past decade, South African equities have lagged global equity benchmarks, but looking closely, it turns out that this is because of the US. Local shares have pretty much tracked non-US over this period. The mere fact of investing outside of South Africa would not have been terribly helpful, you needed to have been in the right country (the US) and the right sectors (technology and consumer discretionary).

US, non-US and South African equity indices in rand South African bonds, meanwhile, have kept up with global bonds in total returns over the past decade, and have been much less volatile despite multiple credit rating downgrades. Over 20 years, SA bonds are far ahead. 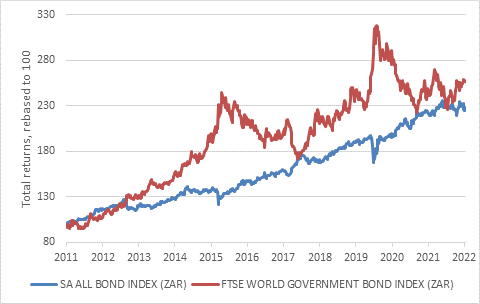 The second principle is valuation. While South African bonds and equities are trading at very cheap valuations compared to international counterparts and their own history, selling out right now can end up being a costly decision.

South African equities trade at substantial discount to global equities and bond yields remain considerably above any reasonable expectation of future inflation. The rand also looks undervalued compared to the US dollar as the latter has surged against pretty much all other currencies.

The rand remains an important shock absorber for the economy and therefore its declines should not be seen as purely negative.

The rand tends to fall at times of global stress – as is the case at the moment – and this can somewhat offset declines in export prices and the dollar values of overseas assets.

The rand is also relevant to the third principle: beware currency mismatches.

The rand is the currency in daily use in South Africa. This is not the case in all emerging markets, where dollars are often in widespread use due to the lack of a credible local currency and financial system. Argentina and Zimbabwe are good examples. It means, though, that South Africans must settle their bills in rands, and therefore need to consider the impact of exchange rate movements on retirement savings. We’re so used to thinking that the rand only goes in one direction, down, but it can go meaningfully in the other way, and it has in the past – 2002, 2009, 2016, 2021 – and it will in future. It typically happens when the dollar weakens. The dollar is now at 20-year highs against the other major currencies but will not stay this strong forever.

A scenario of rand strength at some point is not far-fetched. 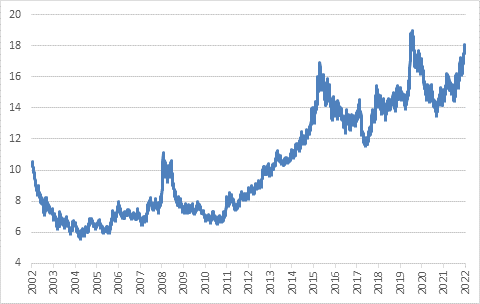 In other words, local investors can largely insulate themselves from challenges in the domestic economy but should approach this sensibly. At any rate, the biggest threat to investment returns at the moment does not come from Eskom or some other local source but from rising US interest rates, a strong dollar, and the increasing risk of a global economic slowdown.

Light at the end of the tunnel

Nonetheless, what hope is there of addressing the domestic challenges?

This applies in terms of national government’s renewable energy programme as well as private companies and municipalities generating for own use.

In terms of the former, Bid Window 6 of the Renewable Energy Independent Power Producer Procurement (Reippp) has attracted 56 bids totalling 9 600MW of power. From these, projects totalling 4 200MW will be selected.

In terms of private generation, already 500MW worth of projects have been registered with energy regulator Nersa this year, from virtually nothing in previous years.

While consumer spending is likely to remain under some pressure due to high unemployment, inflation and rising interest rates, the Reserve Bank forecasts a substantial increase in total fixed investment spending as, among other things, private electricity projects ramp up.

Nedbank’s tracker of new capex projects shows announcements to the value of R267 billion (annualised) in the first half of the year, up from R214 billion in 2021 and the pre-Covid R138 billion in 2019. Most of these projects are private, including one of the world’s largest green ammonia plants under construction in Coega at an estimated cost of R78 billion. The plant will include its own 3 200MW wind and solar power-generating capacity.

There are still other key bottlenecks to be resolved. Notably, even with elevated commodity prices, export volumes of mineral products have declined due to inefficiencies in Transnet’s rail and port operations.

The Minerals Council SA last week noted that fixing logistical bottlenecks could raise mining revenues by R150 billion, contributing an additional R27 billion to the fiscus and creating tens of thousands of jobs.

Without the logistical capacity to export greater volumes, there is little incentive for mines to expand production of bulk commodities, and indeed, overall mining production levels have not grown much over the past decade. A key intervention would be to let the mines themselves run the trains or work with trusted (and accountable) private operators.

The century-old idea that the state needs to be at the centre of key network industries in South Africa is fading but needs to be put to bed once and for all.

Not for the faint-hearted

South Africa continues to be a tough place in which to do business, and a tough place to live. The poorer you are, the tougher it is by orders of magnitude, something armchair critics writing from upmarket estates tend to forget.

The challenges are numerous, but there are signs of things going in the right direction in terms of economic policy, and importantly, it is likely that these reforms will stick even if politics is likely to be noisy ahead of the ANC’s elective conference and in the run-up to the national election in 2024.

Coalition governments have been unstable at local government level. It is an arrangement that is common in other countries and something South Africans will have to get used to. However, more democracy is in most cases preferable to less democracy. Democracy can seem chaotic, but the protection and expression of fundamental rights is crucial for investors.

It is no surprise that the best investment returns come from democracies like the US and Australia and not from autocracies like China and Russia.

But even in this tough environment, there are clearly businesses making big investments in the future. Indeed, it is often precisely because of the tough environment that businesses invest more in, for instance, more efficient processes. Witness the massive spending on new generation warehouses and distribution centres as an example.

Investors should adopt a similar mindset. It is exactly when markets are down that the seeds can be sown for enhanced long-term returns.

The first step is to stay invested, and not be swayed by scare stories. Selling out after the bad news has been priced in is a recipe for getting poorer, not richer. Secondly, if you can, lean into the weakness. When something is on sale, buy more. The easiest way to do this is simply through regular rebalancing and also making regular investments, benefiting from rand cost averaging.

Finally, portfolio diversification means that you are not betting on a single scenario playing out, but rather anticipating that the future can unfold in many unpredictable ways.