Apple Inc. today announced a new lineup of iPads, including a redesigned 10th-generation model featuring the A14 Bionic chip and new versions of the iPad Pro powered by the M2 chip, alongside a new Apple TV 4K with increased storage.

The new iPad and iPad Pro support iPadOS 16 under the hood that’s supposed to bring laptop processing capability multitasking to tablets and greater productivity and collaboration features. Both also received more features to support Apple Pencil with the iPad Pro getting “hover,” a specialized mode that can detect the pencil floating slightly above the screen.

Apple unveiled the new generation of iPad Pro with two models, an 11-inch and a 12.9-inch, available with 128 gigabytes, 256 gigabytes, 1 terabyte and 2 terabytes of storage. It also features 16 gigabytes of RAM.

The M2 chip inside the iPad Pro was unveiled by Apple during WWDC 2022 in June and features an eight-core central processing unit, which Apple says is 15% faster than the M1 chip. It also has a 10-core graphics processing unit capable of 35% faster graphics performance than the previous chip, making it good for gaming and visual rendering. When coupled with ProRes technology, it can also be used for professional photography and footage editing.

The new iPad Pro also features the Wi-Fi 6E standard capable of downloads at up to 2.4 gigabytes per second, up to two times faster than the previous generation. There are also cellular models with 5G that now support more 5G networks around the world.

Features available with iPadOS 16 include the new Stage Manager, a new multitasking experience that automatically organizes apps and windows to make it easy and quick to switch between tasks. Using the new operating system, it will also be possible to unlock desktop apps optimized for display on the iPad Pro.

Users of the 12.9-inch iPad Pro will also gain access to a specialized color reference mode using the Liquid Retina XDR display that will allow them to match color requirements for composing, color grading and maintaining consistent image quality. 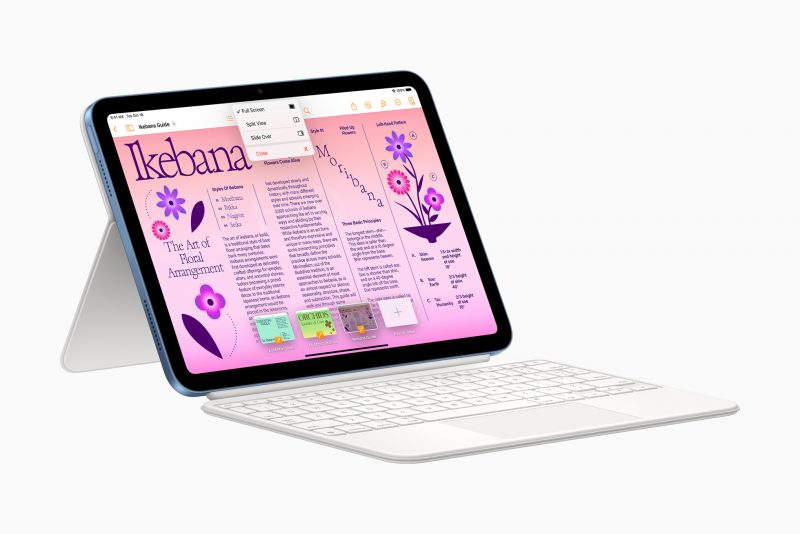 Apple redesigned the iPad with a new screen design for its 10.9-inch Liquid Retina display that extends to the thick bezel edge, designed to provide users with more screen to work with for apps and games. The new device also sports the A14 Bionic chip, which is designed to provide better battery life and performance.

The new Liquid Retina display provides 2360-by-1640-pixel resolution at near 4 million pixels and 500 nits of brightness, which is bright enough for most conditions, and Apple’s True Tone technology to keep colors consistent.

The camera on the new iPad has also been changed, the first time for an iPad, the front-facing camera is now located along the landscape edge. The objective of this change is so that when users are recording for social media or video calls, they will be looking directly into the camera.

The tablet also features dual microphones that are designed to work in unison with the cameras, they will capture audio from the camera in use to reduce unwanted background noise. Stereo speakers have been embedded in landscape along the tablet, when combined with the larger display, to offer a better audio soundstage experience.

Alongside the tablet, Apple also announced the Magic Keyboard Folio accessory designed for the new iPad. It is a keyboard accessory that attaches to the iPad, with full-size keys, one millimeter of travel, a responsive feel and a large trackpad with click-anywhere and multi-touch gesture control. The keyboard features a 14-key function row for easy access to shortcuts, including adjusting brightness and volume controls.

The keyboard attaches magnetically to the Smart Connector on the edge of the iPad making it easy to click on and click off. The attachment point provides both power and data, meaning that it never needs to be charged or paired. The back cover of the keyboard itself has an adjustable stand allowing it to tent the iPad to angle it as desired.

With iPadOS, users get access to a large number of productivity and collaboration features including the ability to edit and unsend recently sent Messages. Users can access a new productivity app called Freeform with a flexible canvas with support for Apple Pencil that allows users to collaborate from anywhere. The Safari web browser now also has shared Tab Groups for collaborative browsing. 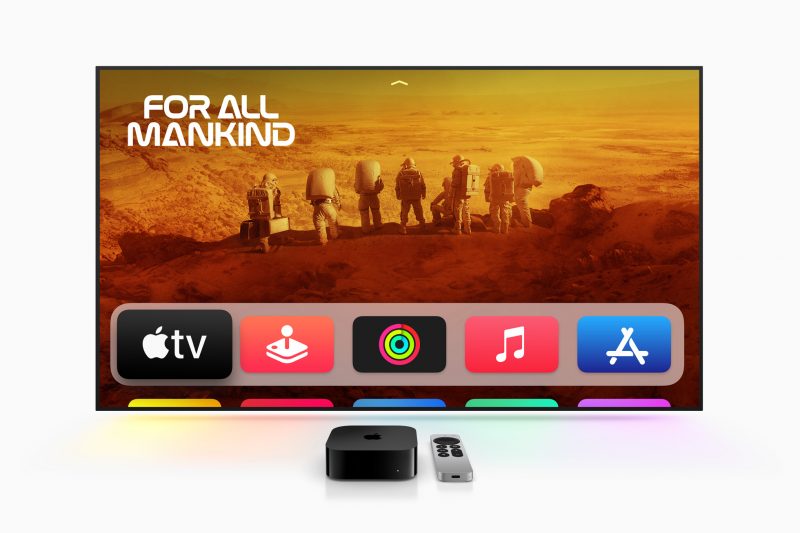 Apple unveiled the next generation of the Apple TV 4K and revealed that it will be powered by the A15 Bionic chip providing support for the newest high dynamic range display and Dolby Vision.

“Apple TV 4K is the ultimate way for Apple users to enjoy their favorite entertainment on the biggest screen in the home, and now it is more powerful than ever,” said Bob Borchers, Apple’s vice president of worldwide product marketing.

The new Apple TV 4K comes in a WiFi version, which offers 64 gigabytes of storage and a WiFi plus Ethernet version with twice the storage.

The A15 Bionic chip allows the new Apple TV 4K to deliver experiences faster and smoother than ever, Apple claims. Its CPU performance is now up to 50% faster than the previous generation, providing faster navigation and faster user interface animations. Its graphics processing performance is up to 30% faster, meaning it can deliver even smoother gameplay.

Using Siri remote, which ships with the Apple TV, users get a touch-enabled trackpad for easier navigation. The new remote also features a USB-C port for charging, doing away with the previous Lightning port.

Upcoming this fall, tvOS 16 will receive updates to Siri that will make it easier for customers to control their TV with their voice. Siri for Apple TV will receive a total redesign that will be able to recognize distinct voices so all users can access their own personal profile of movies and apps, and pick up where they left off. By using the Siri remote and asking, “What should I watch?” users can get a personalized list simply based on their own voice.

This same feature is being extended to people wearing AirPods, who can say “Hey Siri” and gain control of their Apple TV as well.

The new Apple TV with Siri remote will be available starting at $129 beginning today and will appear in stores starting Nov. 4.