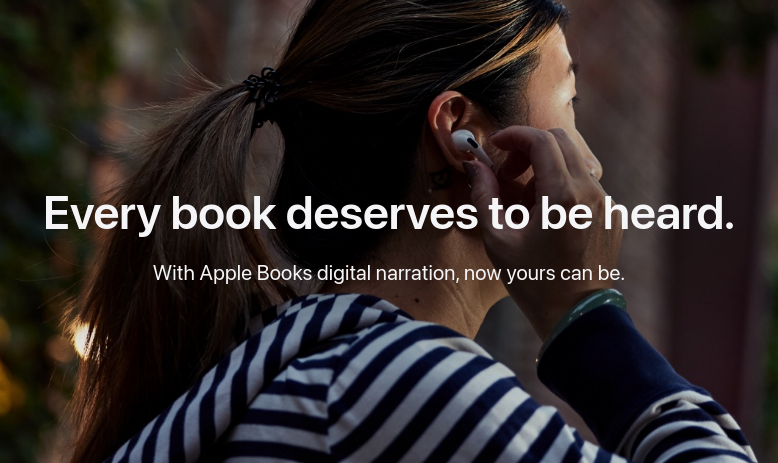 Apple Inc. has made audiobooks narrated by a text-to-speech artificial intelligence algorithm available through Apple Books. The digital narration feature, as it’s called, is designed to make audiobooks more accessible by reducing the complexity and costs of creating them.

The current model for audiobook production generally involves authors either narrating their own books, or hiring someone to do it for them. It’s a costly process that can take weeks to perform. AI-powered narrators on the other hand are essentially free, and make it much more affordable for smaller publishers and lesser-known authors to create audio versions of their books.

The Guardian, which first reported the news, said Apple has already approached a number of independent publishers as potential partners, swaying them with the offer of shouldering the production costs. Writers who sell audiobooks through Apple Books will reportedly receive 70% of the sales price, with Apple taking a 30% cut.

According to Apple, authors and publishers will retain full rights to their audiobooks, and are free to publish human-narrated versions as well, if they desire.

“This is an Apple Books audiobook narrated by a digital voice based on a human narrator,” reads each audiobook listing that uses Apple’s digital narration service. The listings include both free and paid books, and a report in The Verge says that while the voices sound perfectly intelligible, they also have an unmistakable “artificial edge” that lacks the same warmth as a human storyteller’s voice.

Apple insists that it will be able to improve its AI voices over time and make them sound more human-like, but one audiobook producer told The Guardian that it would struggle to match humans.

“The narrator brings a whole new range of art in creating audiobooks, and we believe that’s a powerful thing,” said David Caron, a co-producer at Canada’s largest audiobook publisher.

According to Apple’s website, the digital narration feature is currently only available for select romance and fiction books. They’re narrated by two different voices: Madison and Jackson, though there are two more voices under development, Helena and Mitchell, which will be used to narrate non-fiction books. The service is currently only available for English language books.

Users can search within the Apple Books app for “AI narration” and find a lengthy list of romance novels with a small notice that indicates they’re “narrated by Apple Books”.

The Guardian said Apple originally intended to launch the digital narration feature in November, only to delay the release as the news headlines were dominated by the chaos around Elon Musk’s acquisition of Twitter Inc., and news of large layoffs at firms like Meta Platforms Inc.

One of Apple’s biggest rivals in the audiobook industry is Amazon.com Inc., which once offered a text-to-speech narration feature for some Amazon Kindle books. However, Amazon discontinued that service around 10 years ago due to copyright concerns. These days, Amazon has rules that stipulate that audiobooks on Audible “must be narrated by a human”.