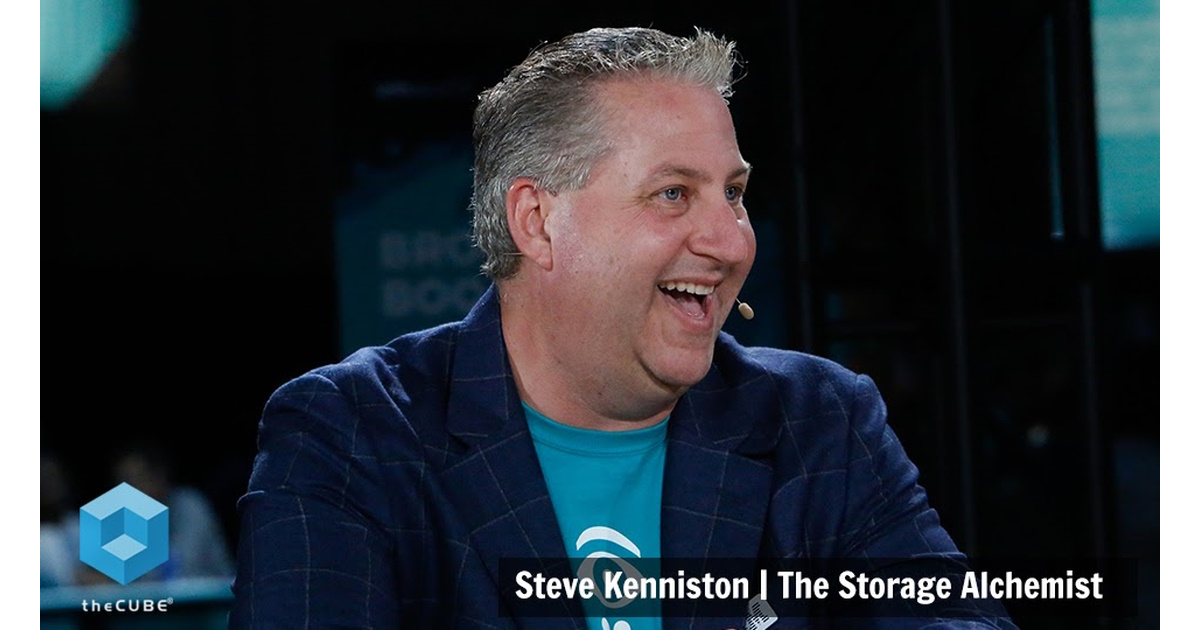 TheCUBE’s Executive Spotlight Series taps into the knowledge base of theCUBE alumni to share the accumulated wisdom of industry leaders with our community. In this feature, we speak with Steve Kenniston, senior cybersecurity consultant, Dell Technologies Inc. who is known to followers of his blog and podcasts as The Storage Alchemist.

Alchemists take commonplace materials and transform them into scintillating treasures that bring them wealth and fame. It’s an apt analogy for technology startups, which, like alchemists, are able to create riches from the combination of basic materials and advanced skills.

“What we have in technology companies is interesting technology, just like interesting metals,” said Steve Kenniston (pictured), senior cybersecurity consultant at Dell Technologies Inc. “But until you form and shape them into the right story, it’s hard for consumers of that technology to pull the value or pull the gold out of them.”

Kenniston is known in the tech industry as “The Storage Alchemist,” a moniker he adopted during the mid-2000s blogging boom.

“Everybody had a blog, and every blogger had their own blog handle,” recalled Kenniston, naming The Storage Anarchist and 3PAR Farley as two contemporaries. Many ventures launched during the heyday of the blog have disappeared into the Wayback Machine,  but The Storage Alchemist is still going strong.

In a one-on-one discussion with SiliconANGLE Media, Kenniston shared insights from his career journey, disclosed the secret formula for technology alchemy, and revealed if he has been successful in his quest to find the ultimate storage truth.

Discovering the ‘why’ behind Steve Kenniston

Growing up on the coast of Maine, Kenniston would often head out deep sea fishing for tuna, and he spent eight years in the United States Navy Reserve with the Naval Mobile Construction Battalion Seabees. He still has a passion for being out on the water, and among the long list of technology certifications on his resume, you’ll find that he holds a license as a 100GT Boat Captain. The ocean gives him a respite from the fast-pace of the information technology world, he told SiliconANGLE.

“If you’re out there, you can’t really get reception. So, it’s peaceful. It’s a good way to disconnect,” he said.

His time in the military and connection with the sea could be the secret to Kenniston’s down-to-earth attitude about consulting. He will tell his clients straight up what they need, even if this means not gaining a sale.

“Not every solution is the solution for every single customer,” he said.

Another unusual credential Kenniston holds is Simon Sinek’s “Start with Why” practitioner. Sinek’s brand of leadership training focuses on optimism, helping Kenniston maintain a positive attitude in a career spanning more than a dozen companies. Living through Avamar Technologies acquisition by EMC Corp., which was later acquired by Dell, Kenniston has firsthand experience with major corporate culture shifts.

“My optimism is really around the belief that I can go into any technology company in my space to make a difference and help them realize their full potential,” he stated.

The goal of many startups is to be acquired by a larger corporation, providing a big payout for the founders. But sometimes there is a missing element in their alchemical formula: the underlying “why” to support market relevance. Kenniston noticed that, while some executive teams had  innovative technology and a useful product, “they wouldn’t know why the company exists or why customers should buy their products in particular,” he said.

The ability to understand technology in the context of how it can help the consumer and the customer is a defining skill in Kenniston’s approach as both consultant and tech evangelist. He has the vision to see beyond a set of features and statistics to identify the gaps in a company’s strategy.

“It’s more about if a customer needs to utilize or needs a capability in order to fill a gap to become more competitive, be stronger, and to grow,” he said. “I think the honesty that comes from thoughtfulness and concern in having good conversations with customers comes from really understanding their problem and having the ability to [say] … ‘I don’t think that my solution, just because I want to put food on my table, is what I need to be selling you.’”

While Kenniston has a talent for pinpointing how technology can be best implemented for growth and competitive value, resolving his quest for the ultimate storage truth has proven much harder than he thought when first posting his goal on The Storage Alchemist site.

“I probably picked the wrong thing to be searching for,” he joked, as he admitted that storage technology truth, like all technology, is a “moving target based on what the consumer’s needs are.”

The closest he has come to discovering that truth is the realization that “all storage is a commodity.”

“What really ends up happening from a truth perspective is the value to storage becomes the software that you use on top of it that does specific things,” he said. “I think the software is the key.”

While he may not have found the ultimate truth of storage, Kenniston’s blog has brought him a different reward. His expertise in using new media as a medium for imparting industry knowledge was recognized with a Telly Award. Although he has a long list of licenses and certifications to his name, the award is the biggest honor he has received in his career.

“I really, really, really love new media,” he stated. “The best way to have a customer believe that you really are capable of doing what you say you do is to talk with other customers.”

Rather than following the accepted format of interviewing customers in a studio, Kenniston decided to make a storage and data-focused version of his favorite show, “Anthony Bourdain: Parts Unknown.”

In “Data Unknown,” Kenniston traveled the world to discuss data and storage from a cultural perspective. It was an episode on “India’s untapped data potential” that won the Telly.

“It was an idea that I was passionate about, so I wanted to drive this forward,” he said. “We did it for a company while working for a company and in talking to their customer, but this was something they had never done before.”

During his time in India, Kennison experienced the use of multifactor authentication in a way that he believes is the future of security across the globe. Stopping at an ATM with his Indian host, he was surprised to see him not only enter his PIN, but also a code that he received on his phone.

“To him, this was no big deal … but for me, I was looking at it like, ‘Wow, that’s crazy. You already have a code; it is pretty safe.’ But I think that’s going to be the norm pretty soon,” he said, referring to the need to increase security by including MFA on personal devices alongside the security built into edge devices accessible to the public, such as ATMs.

He relates this to the evolution of backup and disaster recovery in the storage market.

“Twenty years ago, when I started, maybe 50% of the companies in the world did backup … and it was as much convincing a consumer that they needed to protect their data as it was trying to sell them your stuff,” he said. “Today, 100% of companies have backup, and most companies have more than one backup solution because they have different environments that they need to protect and different solutions work better for different reasons. I think security is going to become the exact same way.”

The importance of undertaking a security transformation

Moving from storage evangelist to cybersecurity consultant may seem to be an unusual tangent to take, but the two areas have always been connected, according to Kenniston.

The increased focus on holistic security across the entire lifespan of the product comes from the expanded threat landscape, according to Kenniston.

“Practitioners are looking for the ability to ensure that no matter what component they buy, including storage, that there’s a level of security built in that makes them feel more protected, and they feel more confident about what they’re doing,” he said.

However, in a recent tweet, Kenniston expounded on “the onslaught of backup vendors changing their stripes” and describing themselves as “security vendors” or “zero-trust vendors.”

Expanding his message in a blog post, Kenniston explained that there’s more to integrating security than buying a next-gen data protection solution. To have the confidence that they can withstand cyberattacks, organizations need to build a cyber resilient infrastructure. This means undergoing a security transformation alongside other modernization efforts.

“You’re not just thinking about your on-prem solutions anymore,” Kenniston said. “You now need to start thinking about security from that aspect of, ‘My data is now anywhere and everywhere.’”

The most important piece of advice Kenniston shares with his customers is to take a security assessment in order to identify the holes in their defenses.

“The first thing is to get a great inventory of what’s going on with your infrastructure. Once that happens, that enables you to take the next most positive step and identify which gap is the most glaring, which is the most critical, and which do I have the budget to close first,” he said.

Being honest when answering the questions in a security assessment is critical, according to Kenniston, who reminds his customers that the answers are confidential. “You don’t have to share it with anyone,” he said.

The importance of integrating advanced technologies into hardware was the topic of the two-part “A Blueprint for Trusted Infrastructure” event that aired recently on theCUBE and in which Kenniston presented a session. With its Trusted Infrastructure portfolio, Dell is demonstrating how hardware and software are now integrated into a single product.

“The Dell Trusted Infrastructure story is really software at the end of the day, but it comes packaged and delivered as this hardware solution or this package,” Kenniston stated.

While the rise of the data-driven society is a double-edged sword, the ability to interact globally through connected devices has led to a more integrated and social community and opens doors for people to learn in ways that weren’t accessible before, according to Kenniston.

“My dad always would say, ‘Read the manual, Son,’ but I’m more of a visual learner,” he said, noting how online video and audio content has made a wealth of information easily available to anyone who wants to learn.

“Being a consumer of information and creating a lot of information as a marketer, you need to be able to align to help people to consume that information,” he said. “Not everyone wants to read a white paper or even read a fun eBook, or they just don’t have time.”

Tech-related content, when made accessible, provides a way for the audience to quickly determine whether a topic is worth further investigation, according to Kenniston.

“I’m gonna eat my lunch, watch a couple of people talk about technology, think about things that I need to understand and make some notes, and then go off and do more research. It’s a quick way to ‘fail fast,’” he said.

Like his namesake, The Alchemist in Paulo Coelho’s book, it seems as if The Storage Alchemist has found his individual destiny, and his quest for storage gold has become a journey to share his wisdom with the world.