The morning after Hurricane Ian knocked out power at Westley and Sarah Ferguson’s home in Haines City, Florida, a suburb southwest of Orlando, Westley ran two extension cords into their house from the outlets on the couple’s Ford F-150 Lightning. He plugged the refrigerator into one and a power strip into the second, which was soon powering lamps, fans and a television.

The Fergusons’ setup was more rudimentary than the Lightning’s design allows — Ford’s top-of-the-line in-home charger will automatically start powering an entire house if the truck is plugged in during a blackout — but it was good enough for them to cook beef stew on an electric stovetop and, afterwards, to host another neighbourhood couple for an impromptu movie night. Cell and internet service were also down, so they used a Blu-ray player to watch Casper and a turntable to spin big band jazz records. “There was nowhere we needed to go,” says Westley, a 33-year-old web designer. “So we just stayed home.”

The Fergusons, who have been in Florida since 2013 and lived through Hurricane Irma, weren’t thinking of natural disasters when they ordered their Lightning in May of last year. Westley had long wanted an EV and Sarah, who works in health-care management, wanted a truck to haul things for her side business hosting picnics. Before Ian, they had mainly used the truck’s 12 power outlets — spread between the bed, the cabin, and the frunk — for boondocking overnight on the Space Coast.

“You want to use it when you go camping or you’re having a tailgate. Those are the fun party tricks,” says Westley. “You don’t really want it to be a lifeline to cook dinner or power lights. But it was definitely nice to have.” 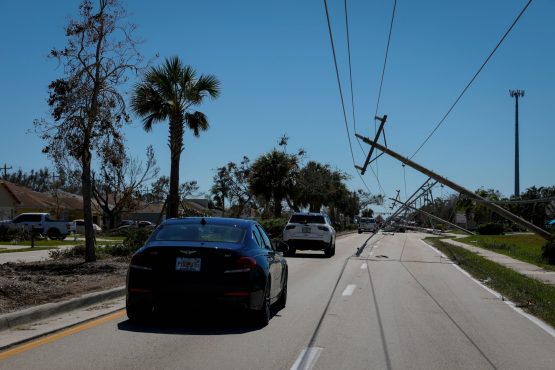 While Ford has made two-way charging and the ability to power a home “if need be” a routine selling point in TV ads for the Lightning, evidence suggests that most EV buyers are like the Fergusons: Disaster preparedness hardly factors in their thinking. In a survey of more than 1 500 US EV owners commissioned by Bloomberg Green, none of the 1% of respondents who filled in their own reasons for purchasing an electric car mentioned it. The majority cited cost savings and environmental benefits.

“Nothing in our market research indicates emergency preparedness is a notable why-buy in the EV market,” says Mark Schirmer, a spokesperson for the research shop Cox Automotive, which routinely surveys buyers on their purchase decisions. “Consumers mostly prioritise price, monthly payment, range and styling. Emergency preparedness is perhaps a nice-to-have.”

But while it may not drive sales, EVs’ backup-power potential is a perk that can delight owners and cement their loyalty. After Westley posted images of his storm experience on social media, Ford CEO Jim Farley shared them on his LinkedIn feed, saying that the company saw an uptick of owners using the vehicles in this way after the storm.

Two-way charging, also known as bidirectional charging, comes in different varieties. Ford is one of a few automakers in the US market offering models with vehicle-to-home (V2H) capability, where the flow of electricity through an at-home charger can be reversed, allowing the car to power an entire house. These setups open the possibility of vehicle-to-grid, or V2G, systems, where utility companies use idle EVs to help manage load. (V2G trials are already underway in Europe and the US.) But even a few on-board power outlets for plugging in appliances — known as vehicle-to-load (V2L) charging — can come in handy in a pinch, such as when a Texas urologist used his Rivian truck to perform a vasectomy during a power outage.

On the night before Ian made landfall, Christine Cannella plugged her Rivian R1T pickup into the charger at her gated community in Fort Myers, Florida, to top off its battery. When Ian arrived, it knocked out power at Cannella’s house for five days — the truck became her backup. Rivian doesn’t yet offer V2H charging, but Cannella used the R1T’s on-board outlets to make coffee and to cook hot dogs on an electric grill for herself and her son. When the house got too muggy, she and her cockapoo puppy slept in the backseat with the air conditioner running on “pet comfort” mode. “I’m not a camper. I’m not an outdoors person,” she says. “But it became a tremendous utility for me and my family during those 48 hours.”

Cannella, 51, had never owned an EV before her Rivian, which she’s been driving since late last year. She bought it, she says, mainly because she works for the company. (Cannella joined Rivian in the fall of 2020 as chief labor and employment counsel. Bloomberg Green learned of her story through a Rivian spokesperson.) But next time a storm comes, she intends to make more use of the truck. “I plan to plug in my fridge,” she says. “I was so afraid that it would draw down the battery too much. I’ve since learned I should have done that instead of throwing away all my food.”

Until recently, most of the attention on EVs and natural disasters has focused on potential problems. In a 2018 paper in Energy Policy, researchers took the scenario of a storm evacuee leaving Key West, Florida, in a Nissan Leaf and found that there likely would not be enough public chargers to avoid becoming stranded. Subsequent research has shown the possibility of cascading grid failures in Florida as many EV evacuees try to recharge simultaneously. Both of these scenarios involve hurricanes, where there is usually the luxury of preparation; sudden events such as wildfires and tsunamis pose even greater risks.

“I would encourage folks to do egress studies,” says Shawn Adderly, a program manager at Pacific Gas and Electric in San Francisco and lead author of the 2018 paper, “so we know how many charging stations we should have and where to put them based on anticipated traffic jams.”

Policy makers have recently begun to take natural disasters into account in EV infrastructure planning. Florida’s Electric Vehicle Roadmap, published in 2020, anticipates that the state will need more fast chargers along evacuation routes as EV adoption increases. Last year, the state’s Department of Environmental Protection awarded Blink Charging Co. millions of dollars in grants to place dozens in strategic spots along evacuation routes, most of which will include modular battery storage so they can continue running during grid failures. (Florida already has a law on the books requiring some gas stations along evacuation routes to have an alternative power source for their pumps.)

While meeting the power demands of EVs during grid disruptions will require more planning and infrastructure, the experience of the Fergusons and others in Florida after Ian demonstrates the potential benefits of electrifying the US fleet. As buses and other public vehicles also become electrified, two-way charging could be used to power shelters and other emergency services or even to help support faltering grids. “It’s not going to be all gloom and doom,” Adderly says. A rally point sign in front of a destroyed Seven Eleven gas station following Hurricane Ian in Fort Myers Beach, Florida, US, on Tuesday, Oct. 4, 2022. Florida cities looking to rebuild from the devastation of Hurricane Ian will be financing their efforts during the worst environment for municipal borrowing in more than a decade. Image: Eva Marie Uzcategui/Bloomberg

Jeremy Judkins lives in North Port, on the Gulf Coast between Sarasota and Fort Myers. A 33-year-old former banker, Judkins now spends his time making videos for TikTok, YouTube and other social media platforms — many of them focused on the Tesla Model X Plaid edition he got in May of this year and the solar panels and Tesla Powerwall batteries he installed in 2020.

Ian hit North Port hard, knocking out power, washing away bridges and flooding streets. The storm, Judkins says, was “like a very small tornado outside of your house for six hours.” Electricity in his neighbourhood stayed out for eight days, but Judkins’s home never lost power.

Tesla doesn’t yet offer V2H charging or standard power outlets on any of its models, a source of frustration for Judkins and other owners. “People are really pushing like, ‘Elon, why don’t you make it so your vehicles can power your house?’” he says. But Judkins was still able to use the 100 kilowatt-hour battery in his Model X to absorb surplus power from his solar panels — turning his home and car into charging hubs for neighbours in need.

“I’m a very bad neighbour,” says Judkins. “I normally do not talk to them. But at this point, I have all this extra power. I feel bad. So I took my paddle board across the street and I was like, ‘Hey, I have power and you can sit in the air conditioning in my car and charge all your stuff.’”