Africa’s three biggest economies are poised to raise interest rates this week, while policy makers in several other countries stake out different approaches to navigate inflation shocks and bring prices under control.

The central banks of Nigeria, South Africa and Egypt are among six likely to tighten monetary policy in the days ahead. Another six countries are set to pause as they assess the impact of previous hikes and relief measures to contain prices. Angola may join a handful of nations that cut borrowing costs this year.

Topping the agenda will be the implications that weaker local currencies will have on the cost of imported goods, as aggressive rate hikes by the Federal Reserve and expectations of more to come boost the dollar.

The repercussions of Russia’s war in Ukraine and an anticipated downturn in Europe and China, alongside emerging price pressures from extreme weather events, are also likely to be in the spotlight. Here’s what central bankers in Africa’s biggest economies may do: 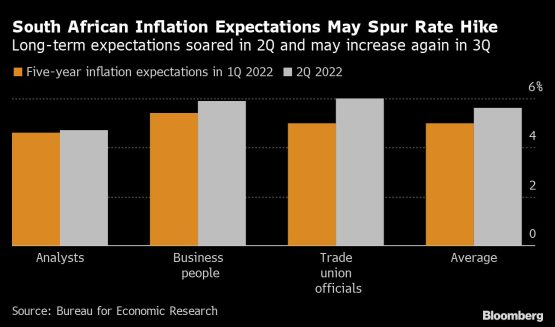 Governor Lesetja Kganyago said in an interview Sept. 8 that the central bank must do whatever it takes to ensure price growth is under control and on a downward trajectory toward the 4.5% midpoint of the monetary policy committee’s inflation-targeting range. Inflation has been above 4.5% since April 2021.

All the economists polled by Bloomberg expect the MPC to raise its benchmark to 6.25% from 5.5%, in what would be the first time it hiked rates by 75 basis points at consecutive meetings. Traders are fully pricing in an increase of that magnitude, but see a chance of a bigger move.

Economists surveyed by Bloomberg are divided over what Egypt’s central bank will do at its second meeting since Hassan Abdalla became acting governor after Tarek Amer’s shock resignation.

While a minority of forecasters predict the benchmark deposit rate will stay at 11.25% for a third meeting, most see an increase of 50 to 100 basis points to curb annual inflation that hit its highest level in almost four years. Should Abdalla favour a more flexible exchange rate to help authorities secure a new loan from the International Monetary Fund, it would raise the risk of currency depreciation that will feed into price pressures. As a result, the MPC is likely to lift rates by 100 basis points, said Maya Senussi, a senior economist at Oxford Economics.

A hike would also make the North African nation’s assets more attractive after months of quickening price gains turned its rates negative when adjusted for inflation, undercutting the appeal of the country’s domestic bonds and bills to foreign investors. The country has seen some $20 billion in foreign outflows from its local debt market this year. A stabilization in the cedi since mid-August will probably see policy makers in Ghana stand pat. The currency has plunged 39% against the dollar this year, sending inflation to its highest level in more than two-decades

At an extraordinary meeting last month, the Bank of Ghana raised its key interest rate by 3 percentage points, adding to 550 basis points of increases since November. It also announced measures to boost foreign-exchange reserves and support the cedi. 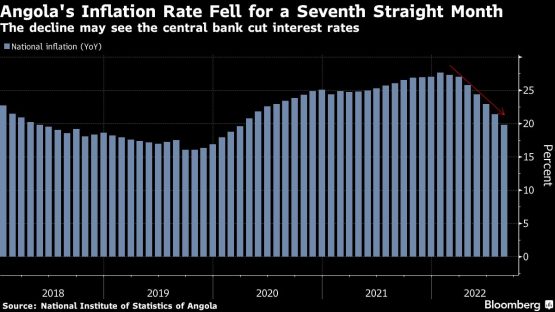 A downswing in inflation will likely see rate setters in Angola, which vies with Nigeria as Africa’s biggest oil producer, cut borrowing costs, making it an outlier at a time of global monetary tightening.

Price growth has already dropped below 20% for the first time in more than two years and the central bank forecasts it will slow to less than 18% by the end of the year. Governor Jose de Lima Massano said this week that a rate cut may be in play given the stabilization of Angola’s foreign-exchange market and consistent declines in inflation.

The Banco Nacional de Angola will probably reduce its benchmark by 200 basis points to 18% as “the inflation rate has been decreasing and may stay close to 14% by the end of the year,” said Wilson Chimoco, an economist at Universidade Catolica de Angola.

Nigeria’s central bank is expected to step up monetary tightening after inflation hit a fresh 17-year high in August. It threatens to remain elevated because of floods in its food-producing regions, a surge in diesel costs and continued currency weakness. Governor Godwin Emefiele said at the July MPC meeting that policy makers will lean toward additional hikes if inflation continues to be “aggressive.” An increase in the benchmark would take it over 14% for the first time since the rate was adopted in 2006.

The central bank “may feel there is still some scope to raise rates in order to attract foreign exchange inflows,” said Joachim MacEbong, lead analyst at Lagos-based Acorn and Sage Consulting. “Inflation remains a serious concern.”

Morocco hasn’t raised interest rates for more than a decade, and it might keep bucking the global trend for monetary tightening.

With wage hikes for lower-earning households kicking in this month and subsidies due to offset energy costs for consumers, authorities may wait to see the impact on inflation, which is running at its highest since the 1980s.

In the first rate decision since William Ruto was sworn in as president, policy makers will likely look past inflation even though it’s been above the central bank’s 7.5% ceiling since June. Kenya’s MPC sees price pressures easing, probably allowing it to extend a pause for a second straight meeting. 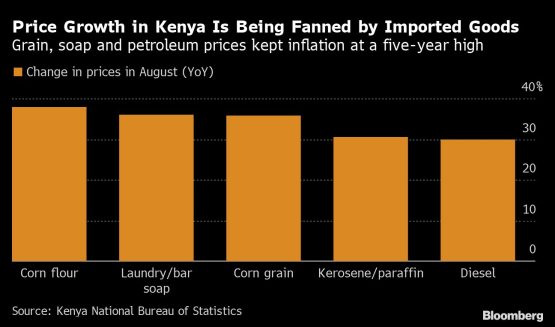 Governor Patrick Njoroge told lawmakers on Monday that global prices of imported goods have started to come down and the central bank is optimistic that by November, the East African nation won’t need subsidies on products like fuel to keep costs in check. Kenya scrapped a subsidy on gasoline this month but kept one for diesel and kerosene.

Another factor in favor of no change in rates is that “inflationary pressures are broadly cost-push from external factors,” while low core price growth “speaks of muted demand pressure in the economy,” Churchill Ogutu, an economist at IC Group said via phone.

Here’s what monetary authorities in Africa’s smaller economies may do:

Eswatini and Lesotho, whose currencies are pegged to the rand, will probably follow South Africa’s central bank and hike on Friday and Tuesday respectively.

Rate setters in Mauritius who are confronting the highest inflation in almost 14 years will likely raise borrowing costs for a third straight meeting on Sept. 28. The MPC is “very mindful of the trajectory that inflation is taking,” Governor Harvesh Seegolam said in an interview earlier this month.

Zimbabwe on Sept. 23 and Mozambique a week later are set to hold borrowing costs after introducing sweeping measures to curb soaring inflation and aggressively raising rates this year. Policy makers in the Seychelles, one of the few global outliers with slowing inflation, are expected to leave the key rate unchanged.